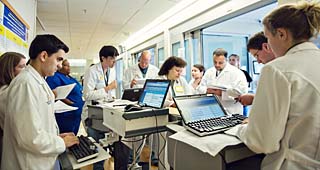 The University of Michigan Medical School in Ann Arbor today announced the launch of a new program that allows college graduates from non-science disciplines to become stronger candidates to get into medical school.

“This is the ideal program for a motivated non-science graduate who is ready for an intensive program at a high level,” says Dr. Matthew Wishart, the program director. “We’re especially interested in those who have already sought experiences to help and serve others, and who are committed to begin formal preparation for a career in medicine.”

The 14-month, post-baccalaureate program, to launch in May, is called Postbac MEDPREP. The deadline for application for the inaugural class is April 6.

The program offers comprehensive Medical College Admission Test preparation in partnership with M Prep, a company started by a U-M medical student that offers online test preparation and content that is integrated with the program curriculum.

IN RELATED NEWS, officials at Royal Oak Medical Devices, a subsidiary of Royal Oak Industries in Bloomfield Hills, say hospitals and medical centers can save tens of thousands of dollars, and in some cases, more than $100,000 in less than one year, by buying medical devices directly without going through a sales representative.

In November, the company launched its “rep-less” model nationally following a regional rollout. A surgeon in Illinois, for example, adapted the concept and is already reaping the fiscal benefits for his hospital, saving approximately $88,000 in the first six months, says the company.

Given new rules under Obamacare, there is growing interest among practicing orthopedic surgeons to find cost-saving alternatives that allows access to state of the art products without suffering premium costs.

Officials from Royal Oak Medical Devices say its business model is designed to create a direct partnership with hospitals and surgical centers. They say the company’s vertical integration with its parent manufacturing company also leads to cost and efficiency savings.

The company manufactures and distributes Michigan made orthopedic spinal implants and instruments at prices 40 percent to 70 percent less than what have previously been considered the “lowest” nationally contracted price points.