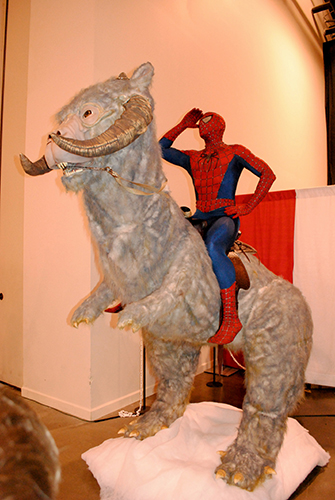 William Shatner, who portrayed Capt. James T. Kirk in the Star Trek television series, will be among the dozens of pop-culture actors appearing at the 25th Annual Motor City Comic Con in May.

The three-day convention, to be held May 16-18 in Novi, is expected to draw about 30,000 fans, says Michael Goldman, founder of the event.

“In the first year (1989), we had an attendance of about 2,500 people, so it’s grown quite a bit in the years in between,” says Goldman, who owns Motor City Comics in Farmington Hills where individual comic books sell for as much as $250,000.

In addition to meet-and-greets with actors and more than 250 comic book creators, writers, and artists, the event will offer costume contests, movie screenings, and speaker panels.

Goldman says he never imagined how big fan conventions would become, both on a national and regional level. “It’s really an amazing change. For many years, we had about 15,000 people in attendance for a few years in a row. But the last five or six years, the whole industry has just seen huge growth,” he says.

One trend driving growth is the number of comic book-based films and television shows that have come out in recent years, Goldman says. Earlier this month, Captain America: The Winter Soldier generated $95 million in its opening weekend.

Meanwhile conference attendees can expect to see established actors, writers, and illustrators in addition to those working on current projects. Scheduled guests include Lindsey Wagner, who portrayed Jamie Sommers in The Bionic Woman, and Lee Majors, who played Steve Austin in The Six Million Dollar Man, as well as actors Andrew McCarthy, Joey Lauren Adams, and Julie Benz.

Goldman notes that this year’s event has a better handle on logistics, providing more space for exhibits and parking at the Suburban Collection Showplace in Novi.

“Last year, we experienced some problems with too many people showing up,” Goldman says. “That isn’t a bad problem to have, but people were backed up for up to a mile to get off the highway and there were some difficulties moving the people inside quickly enough. We’re also working with the Novi police and fire marshal to make sure things move smoothly.”

For more information or to buy tickets, visit motorcitycomiccon.com.