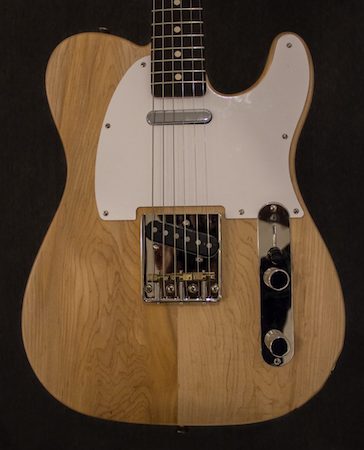 Wallace Detroit Guitars, a manufacturer known for crafting musical instruments out of reclaimed wood from local landmarks, today announced production of the Brewster Wheeler Series. The guitars will be constructed of wood harvested from the historic Brewster Wheeler Recreation Center, which was frequented by such Detroit icons as Joe Louis and Diana Ross and the Supremes.

Opening in 1912, the Brewster Wheeler Recreation Center near I-75 and Mack Avenue was a community hub, best known as the gym were Louis trained. Many local music artists, including Ross and The Funk Brothers, lived in the nearby Brewster-Douglass Housing Projects and were active at the center. Though the development closed in 2006 and the residential buildings and towers were subsequently demolished, a $50 million redevelopment project is currently in the works to renovate the rec center.

“It’s really a premier series for us, since the story of Brewster Wheeler is such an amazing one and because the wood that we have discovered is truly unique,” says Mark Wallace, owner of Wallace Detroit Guitars. “The maple from the benches is beautiful, completely flawless, and covered with black and dark blue paint. We are going to try to leave some of the original paint from the benches to show how far the wood has come from where it was originally.”

Since its founding in 2014, each instrument that Wallace Detroit Guitars creates comes with a certificate of authenticity and ships with a unique handmade guitar strap fashioned from reclaimed car upholstery and a hard-shell leather case. The Brewster Wheeler guitars begin at $2,800 and purchasing information can be found here.