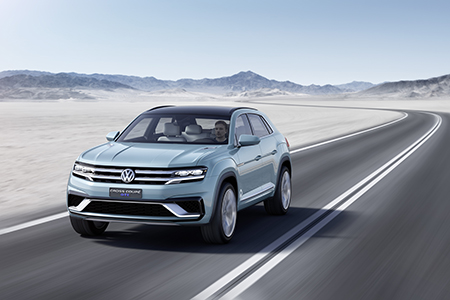 Volkswagen Group has introduced a five-seat, plug-in concept car the automaker’s officials say is just a preview of what’s yet to come for the company’s SUV portfolio in North America.

“In 2016, we will have the biggest SUV offensive in our history, and there is even more in the pipeline,” says Martin Winterkorn, chairman of Volkswagen Group, noting the company will invest $7 billion over the next five year in terms of North American products and manufacturing.

The Cross Coupe GTE, which can achieve a 355 horsepower and has an estimated fuel economy rating of 70 MPGe, is today’s interpretation of a mid-size SUV that will begin production in late 2016 in Chattanooga, Tenn.

In the meantime, the Cross Coupe GTE serves as “the ambassador of a new design language developed by Volkswagen for the U.S.,” says Klaus Bischoff, chief designer at Volkswagen.

“Numerous details hint at how we envision a future production SUV model for North America,” Bischoff says. “The underlying concept combines German engineering and design with a vehicle that suits the American lifestyle. That means high efficiency, clear and powerful design, logical operation, and supreme quality, combined with lots of space, superior performance, and outstanding comfort.”

“Regardless of whether you imagine the Cross Coupe GTE in Manhattan, driving along the Pacific Coast Highway in California or in the middle of the Rocky Mountains, this SUV looks upscale everywhere.”

The Cross Coupe GTE is the third concept car presented by Volkswagen on the way to the production version of the mid-size SUV. Together, the concept — also including the CrossBlue presented at the Auto Show in Detroit in January 2013 and the CrossBlue Coupe, most recently shown in Los Angeles in November 2013 — represent just a part of the wide spectrum of SUV variants that can be produced off Volkswagen’s modular transverse architecture.

Bischoff says thanks to said architecture, Volkswagen can not only offer a vehicle with conventional gasoline and diesel engines, but can produce them as plug-in hybrids, with natural gas powertrains, and as zero tailpipe emissions electric and fuel cell vehicles. This means that the Cross Coupe GTE, too, can be produced with every conceivable powertrain.