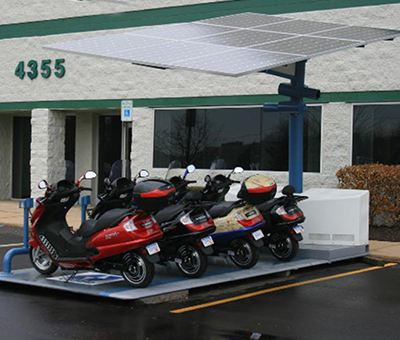 Current Motor, an electric vehicle development and manufacturing company based in Ann Arbor, on Tuesday debuted a fleet of electric scooters targeted to businesses, colleges, municipalities, and consumers.

An individual scooter starts at $9,995, while a mini-fleet of four scooters is priced at $99,950, says Lauren Flanagan, executive chair of Current Motor. “If our Super Scooters are powered principally by (a) solar charging station, you may never have to pay to fuel them,” she says.

In addition to four Super Scooters, a fleet purchase includes a mobile, solar charging station, which fits in a standard parking spot. The scooters have a top speed of 65 miles per hour and can go up to 50 miles per charge. The vehicles can be charged in less than six hours by the station’s on-board battery, while the battery can be recharged in eight hours via the station’s solar panels.

The scooters include on-board 3G communications and GPS. Other features can be customized to track carbon savings, emissions reductions, and fleet performance data.

The cost of a fleet can be subsidized by tax credits and offset by substantial fuel savings, say company officials. According to the company’s website, customers can expect to spend less than 2 cents per mile and $50 per year on electricity for each scooter.