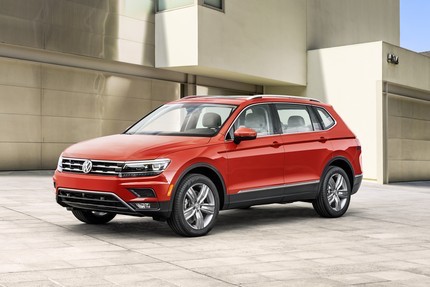 “The new Tiguan demonstrates how we plan to give American customers the usability and versatility they demand without sacrificing style or Volkswagen’s trademark driving dynamics,” says Hinrich J. Woebcken, CEO of the North American Region, Volkswagen. “Every detail of the Tiguan has been thoughtfully engineered for our U.S. customers to maximize space and convenience, while retaining its performance, agility, and value.

As with the Atlas, the Tiguan is based on Volkswagen’s Modular Transverse Matrix architecture. Woebcken says compared with the current model, the new Tiguan has far more interior space; at 185.2-inches long, the 2018 model is 10.7 inches longer than the current version and has up to 57 percent more cargo capacity. The 109.9-inch wheelbase — 4.4 inches longer than the new Tiguan sold in Europe — provides both sliding second-row seats and an optional third row.

To meet the demands of American SUV drivers, the Tiguan now offers a comprehensive suite of driver assistance technology. A rearview camera comes standard and available features include: Adaptive Cruise Control, upgraded for use in stop and go traffic; Forward Collision Warning and Autonomous Emergency Braking (Front Assist) with Pedestrian Monitoring; Blind Spot Monitor with Rear Traffic Alert; and Lane Departure Warning (Lane Assist), which actively helps the driver steer the car back into its lane should the vehicle start drifting into another lane without using the turn signal.

In addition, the 2018 Tiguan offers a combination of both passive and active safety systems that are engineered to meet or exceed current crash regulations. These systems include the class exclusive Automatic Post-Collision Braking System.

The new Tiguan will be powered by an updated version of Volkswagen’s 2.0-liter turbocharged and direct injection TSI engine, making 184 horsepower and 221 pound-feet of torque, driving the front wheels via an eight-speed automatic transmission. Optional 4Motion with Active Control all-wheel-drive offers four driver selectable modes to maximize driving enjoyment and grip, on pavement or off.

Additionally, VW unveiled its I.D. Buzz concept at the North American International Auto Show. Calling it a Microbus for a new era, VW executives say the electric concept forges links between the origins of the Volkswagen brand and its electrifying future.

The I.D. Buzz, like the compact I.D. presented at the Paris Motor Show, is another new Volkswagen vehicle that gives compelling design to electric mobility and reflects a transformation of the brand and its models.

“The Volkswagen brand’s big electric offensive begins in the year 2020 with a completely new vehicle architecture,” says Herbert Diess, chairman of the board of management for the Volkswagen brand. “That is when we will be launching an entirely new generation of fully connected, all-electric vehicles to the market. By 2025 we want to be selling one million of these vehicles annually. We are making electric mobility the new trademark of Volkswagen.”

Volkswagen is showing just how multifaceted electric mobility can be in Detroit with the I.D. Buzz concept vehicle — maximum space utilization with all-wheel drive, electric motors at the front and rear axles, a fully autonomous driving mode (“I.D. Pilot”) and a new generation of display elements and controls.

“The I.D. Buzz is a next-generation vehicle based on the new Modular Electric Drive Kit, offering comfort and plenty of space,” says Frank Welsch, Volkswagen member of the board of management responsible for development. “The overall concept of the I.D. Buzz points the way to the future. This concept vehicle is the world’s first electric multi-purpose vehicle to be equipped with a fully autonomous driving mode. It carries the feeling of freedom of the Microbus over to a completely new era of mobility.”

The zero-emissions all-wheel drive system has a total output of 369 horsepower and an NEDC electric driving range of 270 miles on a predicted U.S. driving cycle. One electric motor at the front axle and one at the rear each deliver a power output of 201 hp, distributed between the two axles. The I.D. Buzz shown in Detroit can accelerate from 0 to 60 mph in about 5 seconds, with a governed top speed of 99 mph.

The vehicle’s 111 kWh battery can be charged to 80 percent of its capacity within 30 minutes using the Combined Charging System.