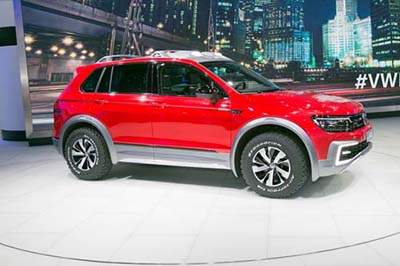 Volkswagen, a brand that has seen declining sales in the United States ever since it admitted it cheated on diesel admission tests in September, today debuted its Tiguan GTE Active Concept plug-in hybrid SUV at the 2016 North American International Auto Show, as it tries to gain back market share in North America.

“We have let down our customers and dealers and we are very sorry for that, and we are committed to making things right,” said Dr. Herbert Diess, chairman of Volkswagen. “We’re very optimistic we will find a solution soon. We are creating a new Volkswagen, and we’re introducing new SUVs in every segment over the next three years.”

The Tiguan GTE, which arrives to the U.S. market in 2017, has two electric motors and a gasoline engine, which can supply all four wheels with power, either automatically or at the push of a button. Diess said the vehicle can cover up to 20 miles in all-electric mode.

Diess said the vehicle’s gasoline engine produces nearly 150 horsepower and more than 180 pounds per feet of torque. The concept can be driven by the front, rear, or by all four wheels.

He said the Tiguan GTE has a long wheelbase and short overhangs. The interior of the vehicle is designed to match the all-terrain exterior. The dark aluminum trim strips that wrap around the instrument panel and door trim panels match the materials used for the front and rear underbody guards and for the roof components. The steering wheel has dark chrome accents and the vehicle has two-tone leather upholstery.

“We had a very challenging year in 2015, and we’re starting to implement remedies of the diesel emission issue,” said Michael Horn, president and CEO of Volkswagen Group of America Inc. “In 2016, we’re launching the new Passat, the Beetle family’s new coupe, and we’re adding a convertible this year. There will also be a denim version of Beetle to keep the Beetle family fresh, along with a new Golf SportWagen. We are committed to introducing brand new products.”