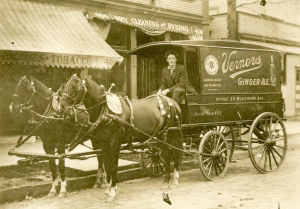 As Vernors ginger ale celebrates its 150th anniversary this summer, the Detroit Historical Museum and the Vernors Club will hold an anniversary party for Detroit’s famous soft drink in June. Activities will include a ginger beer crawl and a world record attempt for the most pop drinkers, among other events.

Keith Wunderlich, president of the Vernors Ginger Ale Collector’s Club, says Vernors week will run from June 5-11, with various restaurants offering unique menu items using Vernors as an ingredient, along with an anniversary party at the Detroit Historical Museum with events such as a poker run (in which participants receive a list of Vernors sites to visit in Detroit and go to as many as they can), a Vernors history presentation, and a screening of the documentary Detroit Remembers When: Made in the Motor City.

“James Vernor (founder of Vernors) served his first glass of Vernors ginger ale at the soda fountain in his pharmacy at 235 Woodward Avenue back in 1866,” Wunderlich says. “No one knew then what we know now, Vernor’s would still be popular 150 years later. Vernors is the oldest continuously produced soda pop in the United States.”

According to the Detroit Historical Society, in the mid-century, the name Vernor’s lost its apostrophe and became simply Vernors.

He says the most popular story of how Vernors originated is that Vernor began experimenting with a formula for ginger ale prior to leaving for the Civil War. Upon his return, he opened a wooden cask of his extract and found the taste he was looking for.

Wunderlich says in 1954, the city of Detroit asked Vernors to move from their riverfront location (now Hart Plaza) to a location just north of today’s Whitney Restaurant along Woodward Avenue in Detroit’s Midtown district. Vernor’s operated a bottling plant at the site up until 1985. The plant was later demolished and replaced by an apartment complex, retail stores, and a parking deck.

For more information on the anniversary celebration, click here.