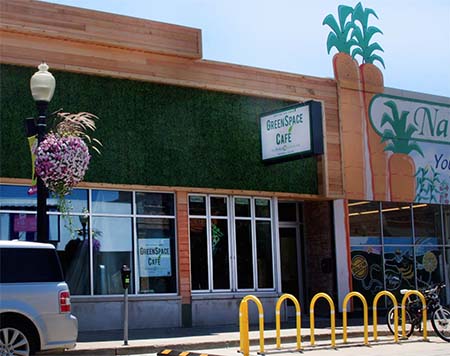 GreenSpace Café, a plant-based, vegan restaurant that will also feature cocktails and raw juice, will open in Ferndale in September.

Dr. Joel Kahn, a local cardiologist and author, decided to open the restaurant with his son, Daniel Kahn, because they felt there was a lack of healthy, vegan restaurants in metro Detroit.

“There are a few nice examples of (healthy restaurants) in town but there was plenty of room left in the world of dining in Detroit to bring the healthiest, the tastiest, and the most beautiful (food) that’s consistent with the growing awareness of the environment and animal rights and put that all in one place without a preachy feeling,” Kahn says.

The 4,000-square-foot restaurant, to be located at 215 W. Nine Mile Rd., will feature salads, wraps, and a wide range of entrees along with a full bar.

“It’s going to be all the basics from salads to wraps to beautiful entrees with a big emphasis on farm to table and local produce that’s organic and brightly colored,” Kahn says. “There are no fryers in the restaurant.”

He says Drought Juice, a cold-pressed juice company with storefronts in cities such as Royal Oak, Detroit, and Bloomfield Hills, will open up a raw juice bar in the restaurant. He says GreenSpace Café will feature classic cocktails along with raw juice cocktails typically seen in Los Angeles or London.

The father and son duo worked with consultants George Vutetakis, director of research and development at Ferndale-based Garden Fresh Gourmet and the former owner of the Inn Season Café in Royal Oak, and Amber Poupore, owner of Royal Oak’s Cacao Tree Café and The Clean Plate in Macomb Township, to develop the restaurant concept and create the menu.

Kahn and his son spent “seven figures” to renovate and combine two spaces into what will be a 100-seat restaurant with an outdoor patio that seats 30 to 40 people.

“We found beautiful brick (and marble floors) that had been covered up for decades,” Kahn says. “Plus, we added a lot of greenery and a 20-seat bar.”