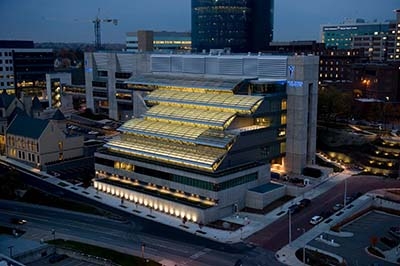 Grand Rapids-based Van Andel Research Institute is partnering with the Michael J. Fox Foundation for Parkinson’s Research and The Cure Parkinson’s Trust to help develop nilotinib, a drug used to treat leukemia, which has shown potential as a therapy for Parkinson’s disease.

As part of the partnership, the three organizations plan to design and co-fund a therapeutic development program that includes a clinical trial of nilotinib, which is expected to begin in 2017.

“It is imperative that we work urgently with the Parkinson’s community — my fellow patients, as well as drug developers — as we continue vetting nilotinib’s potential to address the medical needs of people with Parkinson’s in a safe and effective manner,” says Tom Isaacs, co-founder of The Cure Parkinson’s Trust.

He says preclinical studies have shown that nilotinib may protect neuronal cells in Parkinson’s patients by inhibiting the activity of a protein known as c-Abl. The protein works as a cancer driver in myelogenous leukemia, and recent work in the field has demonstrated it may also play a role in Parkinson’s disease.

The goal of the collaboration is to advance nilotinib as a potentially disease-modifying or symptomatic Parkinson’s treatment by expanding on early safety findings and potential side effects to better understand long-term use of the drug in non-cancer patients.

Established in 1996, the Van Andel Institute is an independent biomedical research and science education organization that supports the work of more than 360 scientists, educators, and staff.