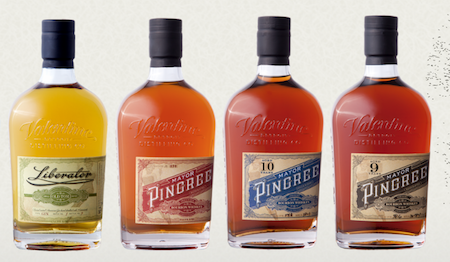 Valetine’s 10-year Mayor Pingree Blue and Black label bourbons received the most prestigious medal awarded, the double gold, which is awarded to the very best among entries that receive a gold medal rating from judges.

The Blue label is a single barrel straight bourbon that is bottled from a single cask sourced from the former Lawrenceburg, Indiana distillery (full proof and non-chill filtered). Aged for 10 years, the selections reflect some Michigan’s oldest casks. The Black label is a limited-release bottling.

“We only enter international spirits competitions to show the world what Detroit has to offer. To be awarded these highest honors means so much to us,” says Rifino Valentine, Valentine’s founder and president.

The awards are the first for Valentine’s bourbon. The company’s vodka was named “world’s best” at the World Vodka Awards in London in 2016.

The company also plans to introduce a new member of the Mayor Pingree family, Orange Label rye whiskey, this June. Valentine will be partnering with local retailers to bring Mayor Pingree to the public, straight from the barrel and uncut.

Blue and Black labels are available in limited quantities throughout Michigan for $89.99 per bottle, and more information can be found here.

Detroit Mayor Hazen Pingree served as Detroit’s Mayor from 1889-1897, and as Michigan’s governor from 1897-1901. A civil war veteran and shoemaker by trade, Pingree moved to Detroit following the war and started Pingree and Smith Co. in 1866 after acquiring H.P. Baldwin’s shoe company.