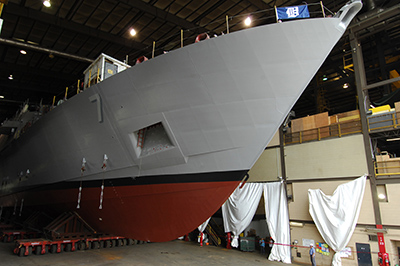 USS Detroit (LC7) — the sixth U.S. Navy warship to be named for the city — will make its maiden voyage in spring 2016, when it sails to the Detroit River in downtown Detroit for its formal commissioning. The ship is expected to dock west of the Renaissance Center at the Detroit/Wayne County Port Authority.

The ship, now under construction in Marinette, Wis., is the seventh Littoral Combat Ship to join the U.S. Navy fleet. It is designed for operation in near-shore environments, but is capable of open-ocean operation.

When completed, the USS Detroit will have a core crew of 50 Navy men and women. The ship — which is 387 feet in length and has a beam of 57 feet and a draft of 14 feet — will be powered by two diesel engines for normal cruising, and two Rolls-Royce MT30 gas turbines for speeds in excess of 40 knots.

Barbara Levin, the ship’s sponsor and wife of Sen. Carl Levin, laid the keel for the new ship on Nov. 8, 2012. This fall, the vessel will be christened USS Detroit (LCS 7) when Barbara breaks the traditional bottle of champagne over the ship’s bow to launch the vessel into the Menominee River.

Following its commissioning on the Detroit River, the ship will sail to its home port of San Diego. In the meantime, USS Detroit Commissioning Committee will recruit local and regional members of the business, civic, and philanthropic communities to support the commissioning ceremony.

“It is an honor to spearhead this effort and get our community excited about supporting this ship that not only carries our name, but represents our great city in its future endeavors around the globe,” says Jay Farner, honorary chairman of the committee and president and chief marketing officer at Quicken Loans in Detroit.