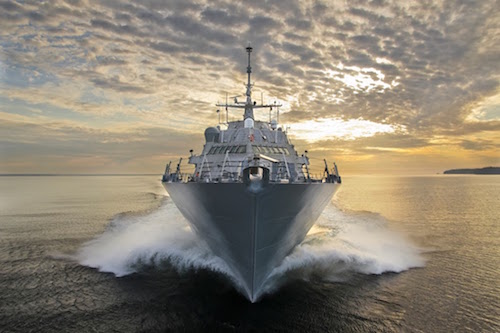 The USS Detroit, a freedom-class littoral Navy combat ship, is arriving in Detroit today, kicking off a list of weeklong activities in the city and Windsor, Ontario. The commissioning was originally scheduled for September, but was delayed until this month.

The event will begin when the battleship docks at the GM Riverwalk early this afternoon. Following the commissioning, the Michigan chapter of the Daughters of the American Revolution will host a welcoming reception inside the nearby GM Wintergarden in the Renaissance Center.

The USS Detroit will begin accepting private group tours on Saturday. The majority of the guests will be veterans and active members of the military, but other groups set to attend are the Boys and Girls Scouts of America, and the Detroit and Bay View Yacht Club. The private tours will be available until Oct. 18, and again on Oct. 20 and 21.

The Metropolitan Detroit Council of the Navy League of the United States will also host the International Super Chef Black Tie Dinner on Saturday. The event will be held from 5 p.m. to 9 p.m. at the St. Clair College Centre for the Arts in Windsor, located at 201 Riverside Dr. The black tie affair will feature chefs from Michigan and Ontario, as well as cooks from the United States and Canadian Navy.

On Monday, crew members of the USS Detroit will visit Southeastern High School in Detroit to discuss careers in the military. Later that day, selected students will have the chance to board the USS Detroit and learn the operations of a military ship, receive an overview on the latest technology, and meet with commanding officers.

“We are extremely excited about the opportunity for the Southeastern High School students to not only engage with the USS Detroit crew, but to tour the ship as well,” says Lauren Hantz, president of the Hantz Foundation, which is sponsoring the visit. “Anytime you can provide experiences for the students to engage with new people, experiences or opportunities through a hands-on encounter (it) brings light to ideas and possibilities that some of the students didn’t even know were possible.”

Veterans Day in the D, an event hosted by the USS Detroit Commissioning Committee to honor veterans in the United States and Canada, will take place on Tuesday at Atwater Brewery in Detroit, located at 237 Jos Campau St. The program will begin at 11:45 a.m. with a parade of flags, the pledge of allegiance, and the playing of the United States and Canadian national anthems. Complimentary Coney dogs, potato chips, soda, water, and desserts will be available from 11 a.m. to 2 p.m, and Atwater will offer a 20 percent discount on all menu items and drinks until 5 p.m. Michael Demsond, prospective commanding officer of the USS Detroit, will be in attendance.

Public tours of the USS Detroit will be available from 1 p.m. to 5 p.m. on Wednesday, and the Michigan Science Center will host a youth day from 10 a.m. to 3 p.m. on Thursday, which will focus on STEM-based Naval programs, films, demos, and presentations.

Later in the evening, Bert’s Warehouse Theatre in Detroit, located at 2739 Russell St., will host The Motor City Sail Away Celebration. VIP tickets start at $30, with a 6 p.m. admission. General admission begins at 7:30 p.m. with tickets starting at $15.