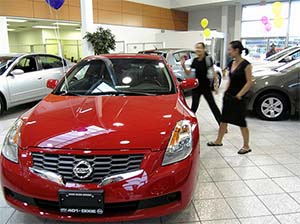 The average number of sales per dealership throughout the United States reached an all-time record of 966 cars and trucks based on vehicle sales of 17.5 million units in 2015, says a report released today by Urban Science, a Detroit-based automotive analytics provider.

“Sales throughout for dealers has achieved another record level due to a record sales year and a stable dealer count,” says Mitchell Phillips, global data director at Urban Science. “This is the fourth consecutive year that this record has been broken.”

“Over the last six years, the dealership network has set a new normal pattern of stability,” Phillips says. “This year the data shows that 96 percent of local markets had virtually no net change over 2014.”

He says the states with the most significant net dealership increases are in Texas, California, Florida, New York, and Iowa.

“(When) reviewing data for January 2016 (however), the current selling rate indicates that while we may get close, we may not break this record (sales year) again in 2016,” Phillips says.

Urban Science, founded in 1977, and headquartered at the Renaissance Center, has offices in Spain, the United Kingdom, France, China, and Mexico, among other countries. The company has more than 850 employees. In September, Urban Science acquired Ann Arbor-based AutoHook, a digital marketing solutions provider focusing on driving in-market shoppers to vehicle OEMs and dealerships.â€‹