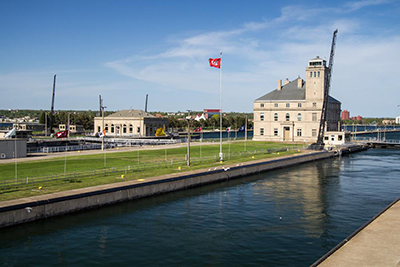 The U.S. Army Corps of Engineers officially opened the Soo Locks in Sault Ste. Marie today for the start of the 2016 shipping season.

The locks act as a gateway for commerce, allowing for the movement of raw materials to travel from Lake Superior to the lower Great Lakes. The Soo Locks are among 16 locks that form the Great Lakes St. Lawrence Seaway navigation system, extending from Duluth, Minn. to the Atlantic Ocean.

“The opening of the Soo Locks is, for us, the opening day of baseball,” says Vanta Coda, executive director of the Duluth Seaway Port Authority. “It’s the excitement of a new season — the anticipation of seeing ships underway and commerce flowing in and out of the Duluth-Superior Harbor beneath the iconic Lift Bridge.”

Since the Soo Locks closed in January, Coda says the U.S. Army Corps of Engineers has completed winter maintenance projects and repairs, along with the installation of a hydraulic system for the Poe Lock (a lock within the Soo Locks); anchorage repairs on the Poe Lock; and work on modernizing the MacArthur Lock’s electrical components.

“The opening of the Poe Lock means America can again flex its industrial muscles,” says Mark Barker, president of The Interlake Steamship Company, an Ohio-based company that operates a fleet of bulk carriers on the Great Lakes. “Iron ore from Minnesota and Michigan and coal from the Powder River Basin will flow to steel mills and power plants and energize our economy.”

“The Great Lakes Seaway System is a crucial link between the U.S. and Canada, and global markets,” says Steve Fisher, executive director of the American Great Lakes Ports Association. “The ports, seaway, and shipping companies depend on an efficient system to move essential cargoes for their customers. The start of the shipping season … means the economy is moving again and that translates into jobs and revenue for the bi-national economies.”