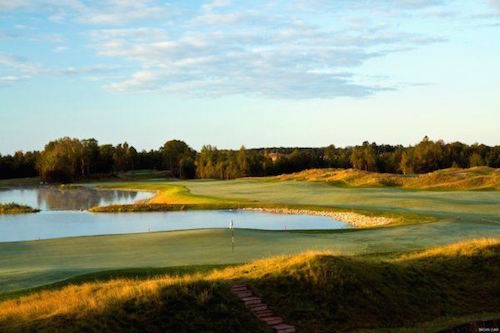 Island Resort and Casino in Harris Township in the Upper Peninsula has announced that its newest 18-hole golf course will be named Sage Run. The facility is expected to hold a grand opening for the golf course in 2018.

“We selected sage because we wanted to highlight another of our four traditional tribal medicines — along with cedar, tobacco, and sweet grass,” he says. “The word ‘run’ in the name references the 10 holes that traverse significantly downhill on the course.”

He says the construction team is planting nine fairways on the course in August through early fall and another nine next spring.

When it opens, the course will feature furry-edged bunkers; a number of short par-4s; single-row irrigation; and a drumlin, a long, sloping ridge that’s an outcome of past glacier movement in the region.

“Sage Run will provide an amazing ‘wow factor’ — there isn’t a weak hole on it,” he says. “It will be a resort-style course with Sweetgrass being more of a championship-style design … Sweetgrass is a prairie-style course with rolling, fescue-lined fairways; Sage Run is 75 percent tree lined with holes running up and mostly down the drumlin.”

The construction of the new golf course is part of an $8 million expansion project by Island Resort and Casino. The expansion also includes the addition of a new spa, which opened in the spring.

Owned and operated by the Hannahville Indian Community, a band of the Potawatomi Nation, the Island Resort and Casino features more than 1,200 slot machines, along with games such as poker, blackjack, and roulette.