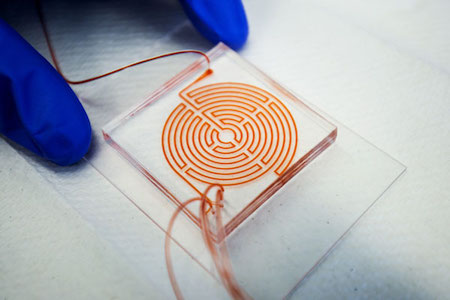 Inspired by the Labyrinth in Greek mythology, researchers at the University of Michigan in Ann Arbor today announced they have created a chip that channels blood samples through a hydrodynamic maze to separate rare circulating cancer cells for analysis.

The chip is already being used in a breast cancer trial and enables doctors to create customized treatments and monitor genetic changes in cells that might spread cancer.

“You cannot put a box around these cells,” says Sunitha Nagrath, U-M associate professor of chemical engineering, who led the development of the chip along with Dr. Max Wicha, the Madeline and Sidney Forbes Professor of Oncology at Michigan Medicine.

Wicha is one of the pioneers of the cancer stem cell hypothesis, which are fluid in their gene expression, transitioning from stem-like cells that are good at surviving in the blood to ordinary cell types that are more suited to growing and dividing. Because of this adaptability, conventional cell targeting by grapping proteins on the cell’s surface, doesn’t work.

“The markers for them are so complex, there is no one marker we could target for all these stages,” says Nagrath.

Size-based sorting gets around this problem, but until the labyrinth, this technique was too imprecise to use on its own. Conventional chips, with spiral-shaped channels, left each cancer cell contaminated with thousands of other cells, particularly white blood cells. The labyrinth riffs on the spiral, sorting the blood’s contents according to the sizes of the cells, with smaller white and red blood cells accumulating in different parts of the fluid channel.

“Bigger cells, like most cancer cells, focus pretty fast due to the curvature. But the smaller the cell is, the longer it takes to get focused,” says Nagrath. “The corners produce a mixing action that makes the smaller white blood cells come close to the equilibrium position much faster.”

The labyrinth was supported by the National Institutes of Health and the U.S. Department of Defense. Additional support came from the Breast Cancer Research Foundation, MedImmune, and the Fashion Footwear Charitable Foundation of New York.