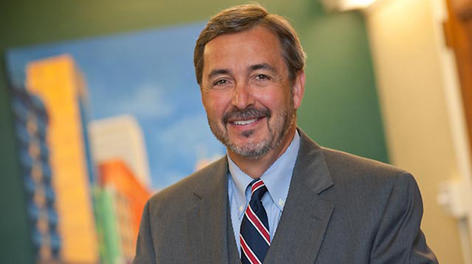 Domenico Grasso, an engineering professor who also served as provost and chief academic officer at the University of Delaware, has been selected as the next chancellor of the University of Michigan-Dearborn. His appointment is effective Aug. 1.

Following a recommendation from U-M President Mark Schlissel, the Board of Regents unanimously approved the appointment during a public meeting Thursday.

“Domenico Grasso comes to UM-Dearborn with impeccable academic credentials and a track record of solid, proven administrative and academic leadership,” says Schlissel. “His career has been marked by thoughtful and creative initiatives and a strong commitment to the transformative nature of higher education.”

Grasso’s appointment comes after an extensive search, led by a 14-member advisory committee made up of UM-Dearborn faculty, students, staff, alumni, and community leaders. The committee was co-chaired by Schlissel and Ghassan Kridli, associate dean of undergraduate education for the College of Engineering and Computer Science. The group hosted a number of town hall meetings and panels to solicit input from the campus and local community.

Grasso will be the sixth leader of the Dearborn campus and will replace Daniel Little, who held the position for 18 years. Little will step down from his chancellorship on July 31 and will remain as a member of faculty.

“I’ve had the opportunity to witness firsthand just how well that campus has done under Dan’s leadership and vision,” says Andrew C. Richner, a U-M Regent and a member of Clark Hill, a large law firm in Detroit. “I’m really excited about it. I see we’re going to continue the tradition of great vision and leadership on that campus under Dr. Grasso, so welcome aboard.”

Throughout his extensive career in higher education, Grasso, 62, has led significant efforts in the areas of engineering education, enrollment management, diversity and community engagement. In his most recent role at UD, Grasso led the campus through a variety of initiatives, including the creation of the Division of Enrollment Management, Cybersecurity Initiative, Financial Services Analytics Institute, and Community Engagement Initiative, as well as the development of university wide programs ranging from entrepreneurship to humanities, social science and arts programs.

“I am thrilled to be here at one of the world’s great universities and am honored to lead one of its most exciting campuses,” says Grasso, a first-generation college graduate and a veteran of the U.S. Army. “I’m eager to begin working with the faculty, staff, students, and the surrounding community to shape the next chapter in the campus’ distinguished history.”

Prior to his roles at the University of Delaware, Grasso served as both the vice president for research and dean of the Graduate College and dean of the College of Engineering and Mathematical Science at the University of Vermont. There he worked with the faculty to build university wide Transdisciplinary Research Initiatives or “Spires of Excellence” for selected and focused future resource investments.

Before joining UVM, Grasso was the Rosemary Bradford Hewlett Professor at Smith College and founding director of its Picker Engineering Program, the first engineering program at a women’s college and one of the few in a liberal arts college in the United States.