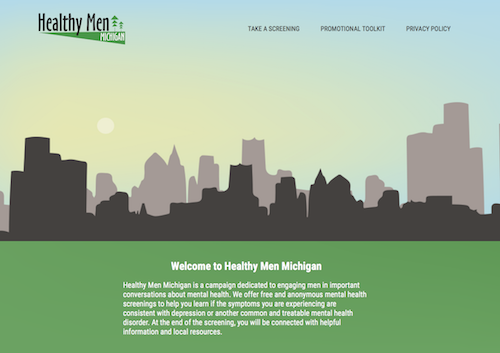 Partnering with mental health programs Screening for Mental Health and Man Therapy, the University of Maryland School of Social Work has launched a new website — healthymenmichigan.org — as part of a statewide campaign to prevent suicide in middle-aged Michigan men.

The website for the Healthy Men Michigan campaign, which focuses on depression and suicide, as well as substance abuse, anxiety, eating disorders, and posttraumatic stress, will offer free online mental health screenings, educational information, along with local, state, and national mental health, suicide, and crisis resources.

“The stigma present around seeking help for mental health issues is pervasive, particularly for men,” says Patricia K. Smith, violence prevention program coordinator from the Michigan Department of Health and Human Services. “Men in Michigan are no different. Healthymenmichigan.org is a great campaign that will allow men in our state to begin thinking about problems they may be having in a different light.”

She says suicide is ranked as one of the top 10 causes of death in Michigan, and has risen by nearly 40 percent since 2000, with the most significant increase found in middle-aged men. The Center for Disease Control’s National Center for Health Statistics reports a 43 percent increase in the rate of suicide among men ages 45 to 64.

The campaign is part of a larger research effort led by Dr. Jodi Jacobson Frey at the university’s social work school. Frey’s research team will recruit up to 300 middle-aged men living in Michigan to complete an online depression and suicide screening through the new website or on the National Depression Screening Day website. Men who score in the range of the screening will then be invited to participate in a study.

The CDC is funding the University of Maryland to evaluate the Healthy Men Michigan campaign.