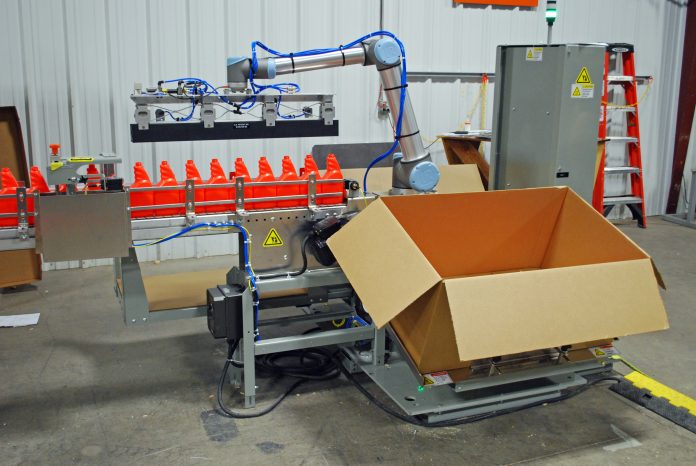 Ann Arbor’s Universal Robots, a company that develops collaborative robots, or cobots, that work safely alongside workers with no need for safety guarding in most scenarios, Wednesday announced it has created the first solution for random robotic case erecting, the XPAK ROBOX. The new cobot erects any box in its suite on-demand without changeover.

The XPAK ROBOX is equipped with a UR10e cobot arm that picks a flat box from one of two magazines, squares the case, and folds and seals the bottom flaps with tape. Additional magazine and custom box conveyance options allow the cobot to integrate into any packaging environment.

The UR10e is the largest cobot in Universal Robots new flagship line, the e-Series, which will be showcased for the first time at Pack Expo from Oct. 14-17 in Chicago. The line adds force and torque sensing, safety features, and improved precision for a wider range of applications. It started shipping in August.

“The e-Series strengthens the core principles defining collaborative robots: fast setup, easy programming, flexible deployment, safe operation, and a quick ROI,” says Stuart Shepherd, regional sales director of Universal Robots’ Americas region. “End-users with complex applications and diverse or uncertain future needs will benefit from the e-Series platform and our unique UR+ ecosystem knowing that their investment will be able to grow with them as their needs change.”

At the expo, Universal Robots will also launch the new PalletizUR from ONExia, a portable, collaborative palletizing system that features a UR10e cobot with graphic software for simple pallet building. The system requires no written code to program.

“The non-invasive PalletizUR can be added to an existing line without additional guarding,” says Greg Shelke, CEO of ONExia. “The e-Series cobots feature a 500 hertz processor, which enables the robots to perform smoother, parabolic moves in less time, resulting in more boxes palletized per minute.”

Collaborative robotics is now the fastest-growing segment of industrial automation.