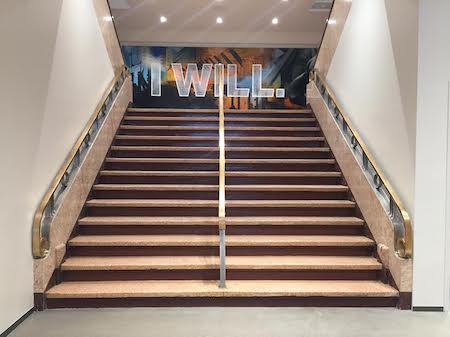 Under Armour, a Baltimore-based athletic wear company, is set to open its first Under Armour Brand warehouse on April 13 at 10 a.m. at 1201 Woodward Ave. (northwest corner of Woodward and State Street).

“This seems to be the heart and soul of where the renaissance is happening,“ Susie McCabe, Under Armour’s senior vice president of global retail. “Woodward Avenue is the street. We are incredibly excited to be offered this location. I think it is the best location in the city.”

In addition to athletic clothing, the brand warehouse is offering the latest Under Armour technology and design innovations. The store features a charging station on the ground level where you can charge your phone while shopping or trying things on in the fitting room.

Each fitting room features a different mural of an athlete including boxing legend Muhammad Ali and Tiger’s pitcher Justin Verlander, painted by local Detroit artists. The fitting rooms also feature screens in which you can connect the UA Play app to through your phone. The app, which was launched in Baltimore, is an augmented virtual reality app that includes selling points, animated athlete characters, and embedded videos that feature the local Detroit artists who painted the murals for the store or athletes featured in the store.

“Making a connection between our two cities, Baltimore and Detroit, is important,” says McCabe. “You want to open up a store that’s meaningful and is a part of something greater — I think Detroit is giving us the opportunity to connect to a market place, to be important to them — and to also be important to us as a brand.”

The Under Armour store will join the Nike store, which opened on 1261 Woodward Ave., last March.