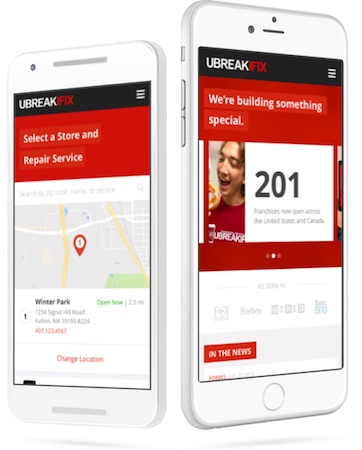 National technology repair company uBreakiFix, which has opened five metro Detroit stores in just over a year, plans additional expansion in the region in the next two years.

“We’ve been able to get a great team together and they’ve been able to execute the uBreakiFix vision as one of the best operators in the country, so I think from a talent pool perspective, the Detroit market has been awesome for uBreakiFix,”  Justin Wetherill, co-founder and CEO, told DBusiness. “From a customer perspective, the stores have been really well received, and five stores in 15 months is one of the fastest growing markets in the country, but it’s all about the people, whether it’s the customers or the people who work in the store.”

Wetherill was in Detroit Wednesday to commemorate uBreakiFix’s growth with a ribbon cutting ceremony at it’s Troy location, 3137 Crooks Rd.  The company is based in Orlando, Fla.

Other area locations include Royal Oak, Southfield, Sterling Heights, and Bloomfield Hills. Wetherill says the company plans to expand into Wayne and Macomb counties next, followed by additional locations in Ann Arbor, Brighton, and Flint over the next two years. The company services all brands of electronics, offering phone screen, computer, and other repairs to consumers and businesses.

Founded in 2009, Wetherill says the company’s transparent approach to repairs and pricing is what keeps customers coming back, including online pricing and free diagnostics.

“Historically, electronics repair has been one of those industries where you take your phone to a shop you’re not familiar with, where they fix your screen, but they break your home button, and it’s shady and you don’t know what to expect,” Wetherill says. “What we tried to do with uBreakiFix from the beginning was to change that perception in the industry and bring some accountability and reliability to it.”

SaveOn in Troy Expands to Chicago and South Florida Markets

DIA to Host ‘Black Is Beautiful: The Photography of Kwame Brathwaite’