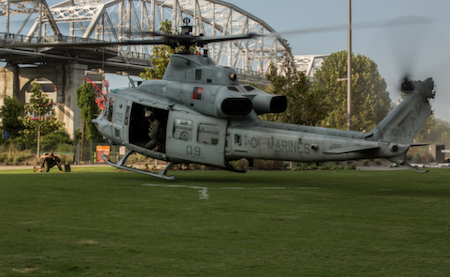 The United States Marine Corps today announced the full schedule for its Marine Week Detroit celebration. The event, which rotates to different cities every year, will offer more than 80 free activities, and feature the attendance of approximately 700 Marines throughout the metro Detroit area from Sept. 6-10.

The celebration kicks off at 6 p.m. on Wednesday, Sept. 6 in Campus Martius Park, and will feature performances by Marine Band San Diego and the Marine Corps Silent Drill Platoon. Attendees will also have the opportunity to climb aboard Marine Corps vehicles and aircraft along Atwater Street near General Motors Co.’s headquarters at the Renaissance Center.

“Detroit is honored to welcome the United States Marine Corps to our city,” says Detroit Mayor Mike Duggan. “Our community looks forward to celebrating the spirit and dedication of the Corps, as this great city offers a spectacular backdrop for the events and ceremonies our residents can enjoy.”

Other highlights of the celebration include two Marine Air-Ground Task Force demonstrations, in which Marines execute a visit, board, search, and seizure mission on a barge in the Detroit riverfront behind the Renaissance Center.

Each morning during Marine Week, military personnel will begin with reveille at 6 a.m. and conclude with Taps at 10 p.m. in front of the Spirit of Detroit statue.

“Marine Week Detroit is an opportunity for us to connect with metro Detroiters and show them what we do as the Nation’s Expeditionary Force in Readiness,” says Brigadier General Raymond Descheneaux, task force commander for Marine Week Detroit. “Every event during Marine Week, from volunteer projects, school engagements, and military demonstrations, allows us to interact with as much of the community as possible.”

Additionally, Marine Week Detroit features many events for sports fans. General Robert B. Neller will throw out the ceremonial first pitch at Comerica Park prior to Sept. 6’s evening matchup with the Kansas City Royals.

“It’s an honor to celebrate the dedication and sacrifice of the United States Marine Corps during Marine Week,” says Detroit Tigers pitcher Justin Verlander. “What an incredible opportunity for Detroit and all surrounding areas to learn more about the Marines’ resources, capabilities, sense of community, and steadfast commitment to protecting our freedom.”

In addition, prior to the Detroit Lions home season opener versus the Arizona Cardinals on Sept. 10, the Marine Air-Ground Task Force will capture the game day football and deliver it to Ford Field. The Corps will also support the Lions with pre-game activities and performances throughout the game. Captain Skye Martin will perform the national anthem.