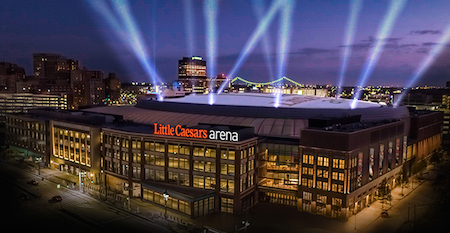 U.S. Figure Skating today announced the selection of Detroit to host the 2019 U.S. Figure Skating Championships from Jan. 19-27, 2019. All junior free skate, dance, and championship events will be held at Little Caesars Arena, and all Junior short programs and dances, and novice, intermediate and juvenile level events will take place at the Detroit Skating Club in Bloomfield Hills.

The last time Detroit hosted the U.S. Championships, at Joe Louis Arena in 1994, skater Nancy Kerrigan was hit on the knee by an assailant in an attack planned by the ex-husband of rival skater Tonya Harding. The incident occurred nearby, following a practice session at Cobo Arena, and Kerrigan dropped out of the competition due to the injury.

U.S. titles will be awarded in ladies, men’s, pairs, and ice dance at the senior, junior, novice, intermediate, and juvenile levels of the U.S. Figure Skating competitive structure. The U.S. Championships, which serves as the final qualifying event to make the U.S World Figure Skating Team annually, and the U.S. Olympic Team every four years, hosts more than 1,700 athletes, coaches, officials, and media personnel. The event is expected to generate more than $18 million in local economic impact.

“U.S. Figure Skating is excited for the return of the U.S. Championships to Detroit for the first time since 1994,” says Sam Auxier, president of U.S. Figure Skating. “Detroit and all of Michigan is a skating hotbed that is home to many of our top athletes, both past and present. Detroit, highlighted by the newly opened Little Caesars Arena and downtown redevelopment, will be a great host to our athletes, coaches, officials, and fans from around the country. It will be a wonderful event in one of the great, new venues in our country.”

U.S. Figure Skating will plan the event with local support from the Detroit Sports Commission, 313 Presents, and the Detroit Skating Club.

“Suburban Detroit is the epicenter for world-class figure skating, so we feel the nation’s most prestigious figure skating event is coming home,” says Kris Smith, director of the Detroit Sports Commission. “The metro Detroit community is primed and ready to showcase our great destination, while raising the bar like we always do to make this the best championship experience yet. We believe we have the best venue in the country in Little Caesars Arena and partners such as the Mayor’s Office, 313 Presents, the Detroit Skating Club, and Detroit Metro Skating Council.”