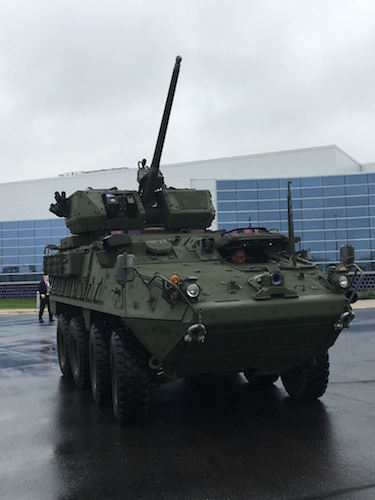 The U.S. Army debuted the first prototype of its upgraded Stryker Infantry Carrier Vehicle this morning at the General Dynamics Land Systems Maneuver Collaboration Center in Sterling Heights. General Dynamics, a military vehicle manufacturer, collaborated with the Army to create the prototype.

The vehicle, which will be known as the Dragoon, is the first of eight Army prototype vehicles upgraded with new lethality capabilities. The vehicle is outfitted with a 30 mm cannon for increased lethality and features a 450 horsepower engine, improved power pack thermal management, smart displays, a new suspension, a fully integrated commander’s station, and more.

The new vehicle will require less gasoline than its previous model, as it will only need 1.5 cups of fuel per engagement. Equipped with various forms of ammunition, it will also be able to transport up to nine passengers.

“Not only does this provide improved firepower, it also enhances vehicle survivability while providing stand-off against potential threat weapons,” says Maj. Gen. David G. Bassett, program executive officer for Ground Combat Systems at the Army. “This symbolic event illustrates the Army’s commitment to meeting the needs of our soldiers in harm’s way — ahead of schedule and on budget.”

Last July, the Army approved a directed requirement to increase lethality for 81 Stryker vehicles for the Second Cavalry Regiment to provide Stryker Brigade Combat Teams with direct fire support to its mounted and dismounted infantry. General Dynamics began working on the prototype project in March 2015 after the Second Cavalry made a request.

The prototype vehicles will begin a series of industry shakedown testing prior to delivering the vehicles to the Army in December. Government testing on the platforms begins in January 2017. General Dynamics plans to produce and deliver 83 production vehicles; all equipped with a remote controlled turret and 30mm cannon.

“The leadership and expertise that (General Dynamic brings) to the table, one based on years of experience with the Stryker and solving complex engineering puzzles, was critical to the upgrade’s success,” said Daniel Allyn, vice chief of staff for the Army.

General Dynamics has worked with the Army to create vehicles and prototypes since 1999. The company provides tanks, rockets, missiles, submarines, warships, fighters, and electronics to all of the military services.