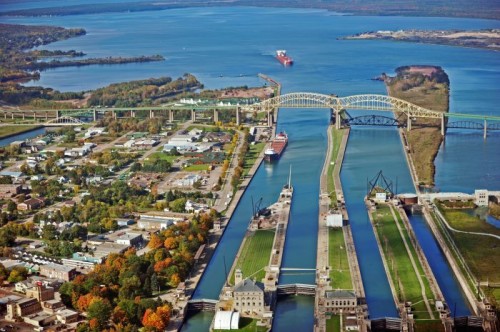 The completed report has documented updated economics to the shipping channel. The new Benefit Cost Ratio was established to seek an updated authorization for construction of a second Poe-sized.

“Now that we have completed the economic validation study, we look forward to the next steps to get a new lock built at the Soo,” says Lt. Col. Dennis Sugrue, district engineer, U.S. Army Corps of Engineers, Detroit District.

Sugrue says the agency’s budgeting process for implementation of the project will be followed, and it will compete with other construction projects throughout the country. The new work is currently authorized to be 100 percent federally funded. The U.S. Army Corps of Engineers is requesting funding consideration beginning in the fiscal year 2020 president’s budget.

The benefits of the project reflect a reduction in risk associated with the Poe Lock being the existing single point of failure for the nation’s value chain of taconite pellets, steel production, and manufacturing. Disruptions to Poe Lock serviceability would impact the supply chain and production of steel.

The Soo Locks are on the St. Marys River and consist of two operational locks that allow vessels to cross the 21-foot elevation change at the St. Marys Falls. The locks are nationally critical infrastructure, and the reliability of the locks is essential to U.S. manufacturing and national security.

The full study is available here.