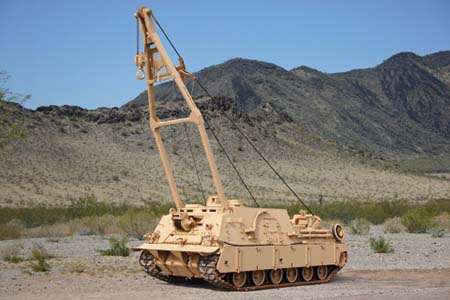 The U.S. Army has awarded BAE Systems, a defense and security company with major operations in Sterling Heights, with a contract of about $110 million to convert military vehicles into more advanced recovery vehicles, called HERCULES, that are used in battlefield rescues and recovery missions.

“The HERCULES is an integral part of the U.S. Army’s Armored Brigade Combat Team and essential to its recovery missions as the fleet becomes heavier,” says John Tile, director of recovery programs for BAE Systems.

Tile says as the fleet gets heavier, it’s important to upgrade the vehicles to support it. The HERCULES is the only vehicle that’s able to recover a M1 Abrams battle tank in a combat environment.

The M88A2 HERCULES was first introduced into the U.S. Army in 1997. The vehicle can perform towing, winching (hoisting or hauling), and recovery operations in war zones as well as carry out repairs to other vehicles.

The main body of the HERCULES is designed to offer protection against mines, artillery fragments, and small arms fire. The vehicle is equipped with a machine gun that has about 1,300 rounds for self-protection. The HERCULES is powered by a V12 twin-turbo diesel engine and can reach speeds up to about 25 miles per hour.