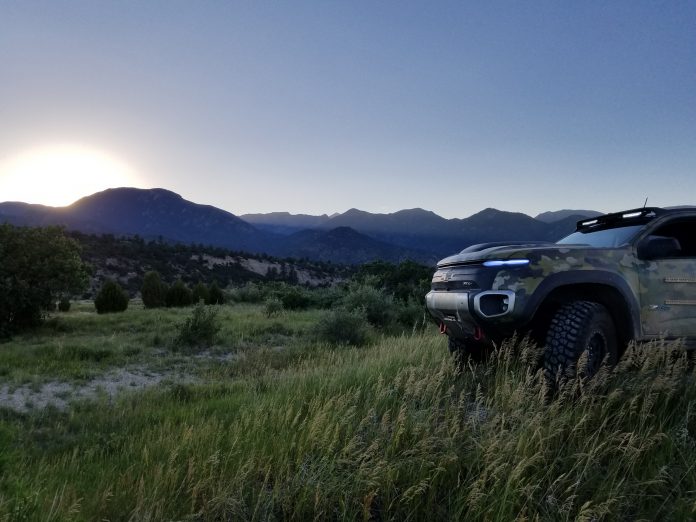 Metro Detroit’s automotive, defense, and technology sectors stand to benefit from the U.S. Army’s recent drive to accelerate the development and modernization of next-generation combat vehicles, military equipment, and communication systems in light of recent advances in autonomous and robotic systems.

From the presentation, Esper and Peters cited the need for the Army and other military branches to integrate autonomous technology as a way to better fight wars, keep soldiers out of harm’s way, and act as a threat deterrent.

As an example, the Army has been working with Chevrolet on the development of the Colorado ZH2 fuel-cell electric vehicle, where a standard pickup is converted into a reconnaissance and military vehicle for use in the military theater. By using an existing vehicle, the Army can rapidly modify it as well as have access to a trove of inexpensive spare parts (relative to the high-costs of developing such a vehicle from scratch).

“One of the key challenges the military has faced, and the Army in particular, has been defining our requirements and keeping them stable,” says Esper. “In the past we would take five to seven years to develop a set of requirements, and they would be so grandiose they would be unachievable for the amount of money one would have and the amount of time you would need.

“So the process of establishing what we call cross-dimensional teams aims for example to reduce that process from three to five years down to 12 to 18 months. And you do that by bringing all the key players and all the stakeholders who are typically involved in a linear process over a time period, (and) you now bring them to the table upfront whether they are the contracting community, the war fighter, the budget people, and the testers, and you bring them up front and agree on those requirements initially, don’t change them, and that has great promise in terms of reducing the requirements process.”

The timeline also can be reduced by prototyping and testing vehicles, components, and technology early on in the development cycle rather than formulating plans to have companies undertake the process individually. Esper says such prototyping would provide for better-defined contracts, as well.

He adds the Army is focused on offering next-generation combat vehicles that are modular, scalable, and are designed with open architecture to provide for the integration of future technology, including robotic systems.

Peters cited how important metro Detroit’s automotive R&D, technology, and manufacturing sectors will be as the U.S. Army prepares for a “dramatically different way of fighting wars in the future. The greater Detroit area and Michigan is a leader when it comes to the development of self-driving vehicles, (and) we’re seeing dramatic advances in the civilian auto market in self-driving.

“We’re expecting Level 4 and Level 5 automobiles — these are cars without steering wheels and without break pedals — out on our highways soon. In fact, Ford Motor Co. announced (autonomous vehicles) will be coming off the assembly line in 2021, and General Motors expects to do that even quicker. This technology is moving very fast, and with self-driving vehicles comes developments in machine learning and artificial intelligence (AI).

“So you’re seeing Michigan as being the center not just for the automotive industry and the place where we can build world-class vehicles, including military vehicles designed and developed here at TARDEC, but also advanced machine learning and artificial intelligence capabilities.”

Peters adds that during the war in Iraq the Army lost more soldiers to logistics attacks than in combat, and driverless vehicles in platoons will greatly improve safety and reduce the number of lives lost.

Esper says the Army is also developing a secure network to facilitate communications between unmanned vehicles and manned vehicles, including both ground and aerial vehicles. “We need to tap all of the talent of the American people and American industry,” he says.