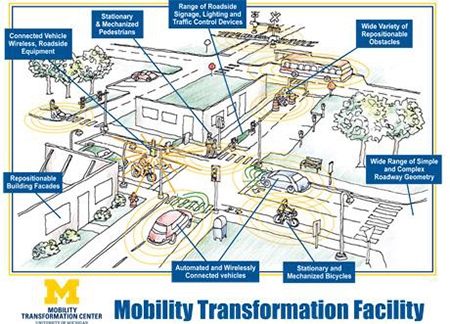 A 32-acre “mini-city,” designed for testing connected and automated vehicle systems, is set to open this spring at the University of Michigan’s North campus, with a formal opening planned for July.

“Connected and automated vehicle technology will usher in a revolution in the mobility of people and goods comparable to that sparked by the introduction of the automobile a century ago,” says Peter Sweatman, director of U-M’s Mobility Transformation Center. “M City will allow us to rigorously test new approaches in a safe, controlled, and realistic environment before we implement them on actual streets.”

To be called M City, the area will feature a network of roads with up to five lanes, intersections, roundabouts, roadway markings, traffic signs and signals, sidewalks, bus facilities, benches, simulated buildings, streetlights, parked cars, pedestrians, and obstacles such as construction barriers.

A key goal of the U-M initiative is to implement a connected and automated mobility system on the streets of southeastern Michigan by 2021, say university officials.

IN RELATED NEWS, Ryan Wolcott, a U-M doctoral candidate in computer science and engineering, has developed a new software system that could drastically reduce the cost of self-driving and automated cars by swapping out laser scanners with a single video camera.

The system builds on the navigation systems in other self-driving cars, which use 3-D laser scanning technology to create a real-time map of their environment, and then compares that real-time map to a pre-drawn map to determine the vehicle’s location.

Wolcott’s system takes the same approach, but converts the map data into a 3-D picture much like a video game. The car’s navigation system can then compare the synthetic pictures with the real-world pictures streaming in from a conventional video camera.

“The laser scanners used by most self-driving cars in development today cost tens of thousands of dollars, and I thought there must be a cheaper sensor that could do the same job,” Wolcott says. “Cameras only cost a few dollars each and they’re already in a lot of cars. So they were an obvious choice.”

The system has been successfully tested on the streets of downtown Ann Arbor, where the car was kept under under manual control for safety. Further testing is slated for this year at M City.