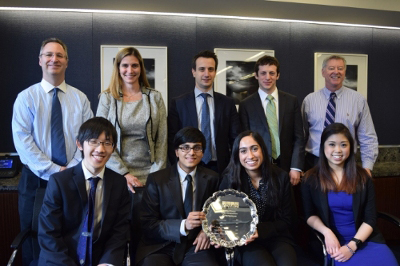 For the second year in a row, a team of students from the University of Michigan in Ann Arbor have won the U.S. case competition sponsored KPMG LLP, an international accounting and auditing firm with a large practice in downtown Detroit. The students will now go on to compete in an international competition.

“Our case study competition gives students an opportunity to develop their global business skill set,” says Becky Sproul, national managing partner for university relations and recruiting at KPMG. “It’s also a great way for our firm to identify top performing students at early stages of their collegiate careers. Each year we are increasingly impressed at the level of intellect and ingenuity that teams exhibit, and this year was no exception.”

Sproul says the U-M team will now compete against teams from more than 20 countries including Australia, Brazil, Serbia, and the United Kingdom at the KPMG International Case Competition finals in Dubai next month. KICC is an international case study competition among the Big Four accounting firms, which includes PricewaterhouseCoopers (PwC, Deloitte Touche Tohmatsu, and Ernst & Young.

This year marks KPMG’s 13th international case competition, with past competitions held in Hong Kong, Madrid, and Sao Paulo, among other cities.