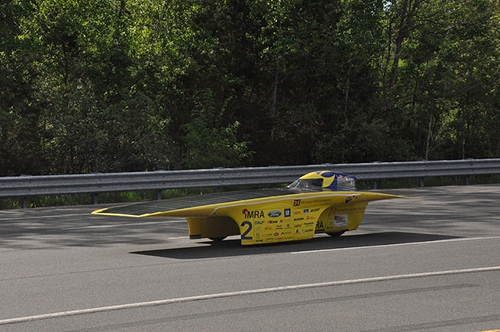 “The last day was the longest, hottest, hardest, but the most satisfying,” says driver Noah Kaczor, a fourth-year economics major at U-M. “It was a big relief crossing the finish line first. I’m proud and impressed by how well we’ve done.”

In the first event of its kind to be held in the Middle East, the inaugural Abu Dhabi Solar Challenge brought together 15 international solar car teams, representing universities including the Hiroshima Institute of Technology in Japan. The route was designed to offer real-world driving conditions to thoroughly test the reliability of all onboard systems, competition officials say.

While the Michigan team of students and alumni has won several competitions in the past, including taking first at the American Solar Challenge last July, this is the first win on an international stage.

“What’s really neat is that we’ve taken a legacy car that was never intended to be competitive at this point, a team of people who have never raced together, and came out here and battled hard against some amazing competitors,” says Joe Lambert, crew chief and a 2004 U-M aerospace engineering graduate. “It speaks to the depth and the integrity of the program that we’ve built. You can step back in, and the heartbeat is still the same.”

The team partnered with Abu Dhabi University for the event, bringing more than a dozen ADU engineering students onto the U-M squad throughout the event.

“Everyone was very friendly and it was impressive to watch their work ethic,” says Mohamed Mukhashin, a fourth-year ADU mechanical engineering student. “Hopefully, in two years, we will have our own car and be able to be in the race with our new friends.”

The team was awarded their trophy by His Highness Sheikh Mohammed bin Zayed Al Nahyan, the crown prince of Abu Dhabi, at the opening ceremonies of the 2015 World Future Energy Summit, which kicks off Abu Dhabi Sustainability week. Quantum will be on display in various venues through the weeklong event, running through Thursday.

IN OTHER AUTOMOTIVE NEWS, the North American International Auto Show drew 215,836 car enthusiasts to Detroit’s Cobo Center this past weekend, up about 3 percent when compared to opening weekend in 2014. Event officials say opening day, with 110,509 visitors, was the strongest in six years.