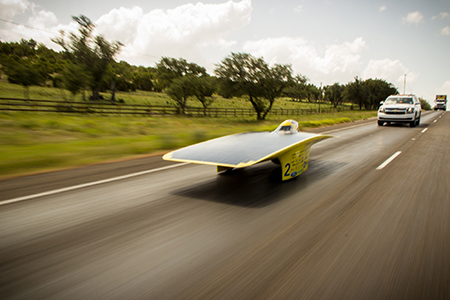 The University of Michigan’s solar car team won the biennial American Solar Challenge that began July 20 in Austin, Texas. When the team crossed the finish line in Minneapolis on Monday, they had traveled 1,722.5 miles in 41:27:29. This is the fifth consecutive win for the U-M team.

However, first place didn’t come easy for the Ann Arbor squad, which raced against 22 other teams of college students that had built their own solar-powered electric vehicles.

“This isn’t just a win,” says Pavan Naik, project manager and junior industrial and operations engineer. “It’s a win after one failure after another. We’ve learned so much from that — how to work as a team and how to help each other out.”

The U-M team — made up of more than 100 students, with nearly 20 participating in its race crew — ran Quantum, a three-wheel vehicle that took first in the American race in 2012 and third in the World Solar Challenge in Australia in 2011.

Setbacks included a motor problem that sidelined the vehicle in the first 10 minutes of the eight-day race, Naik says. While the stop only set them back 20 or 30 minutes, they had been passed by at least five competitors and the team strategists decided to push the car to the speed limit rather than hold back to conserve energy. By the end of the day, U-M was back in the lead.

“We pulled together,” says driver Jake Fratzke, a junior in mechanical engineering. “To see that happen was awesome.”

This is the fifth consecutive win for the University of Michigan Solar Car Team, which will next compete in the World Solar Challenge, to be held in Australia from Oct.18-25, 2015.