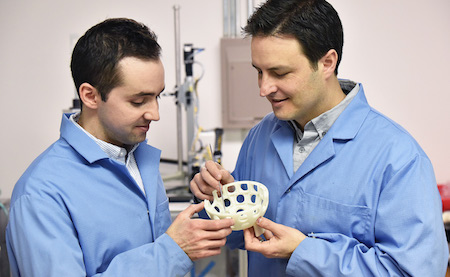 Christine Gibbons, COO of HistoSonics, says the treatment is based on the science of histotripsy, which uses pulsed sound energy for the precise destruction of targeted tissues, which was discovered and developed by scientists at U-M led by Charles Cain, a professor of biomedical engineering. Cain has served as an advisor to HistoSonics, which licensed the technology from U-M Tech Transfer.

“It uses focused sound energy to treat diseased tissue non-invasively. The mechanical aspect of this focus sound allows us to make the treatment area very precise,” says Gibbons. “We believe it will be attractive to clinicians because it can be visualized in real time with an ultrasound or MRI, and will address a significant unmet clinical need.”

The Series B financing of $8.3 million included the conversion of previous debt and interest. The round was led by Venture Investors and had full participation from all existing investors including Hatteras Venture Partners, Fletcher Spaght Ventures, Early Stage Partners, TGap Ventures, Grand Angels, and U-M’s Michigan Investment in New Technology Startups initiative. Joining as a new investor in the new round was Wolverine Venture Fund, a student-run fund administered by the Zell Lurie Institute at U-M’s Ross School of Business.

The company expects a second Series B closing of up to $5 million sometime in the second quarter of 2017.