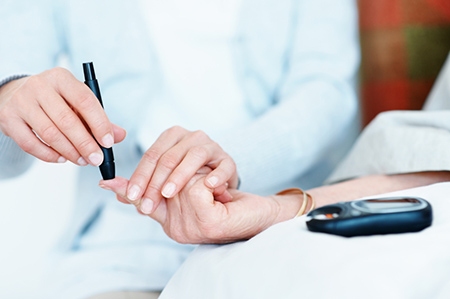 A new approach to diabetes prevention may lead to more personalized and effective treatments in the doctor’s office, thanks to a team of researchers from the University of Michigan, VA Ann Arbor Healthcare System, and Tufts Medical Center in Boston.

The new model, recently published in the British Medical Journal, argues that medical professionals can determine a patient’s chance of benefiting from diabetes-preventing steps by monitoring a select list of criteria.

“Simply having pre-diabetes is not everything,” says Jeremy Sussman, M.D., an assistant professor of general medicine at the U-M Medical School and a research scientist at the VA Center for Clinical Management Research. “This really shows that within the realm of pre-diabetes there’s a lot of variation, and that we need to go beyond single risk factors and look holistically at who are the people in whom a particular approach works best.”

In a study that involved more than 3,000 people, all with a high body mass index and abnormal results on two fasting blood sugar tests, the researchers developed a scoring system for several factors including family history of high blood sugar and waist-to-hip ratio.
They then compared those scores against who ultimately developed diabetes and the impact of the patient’s assigned diabetes-prevention approach (either the drug metformin or a lifestyle-modification program).

The team found that metformin benefited only the people who the model showed had the very highest risk of developing diabetes.

For the one-quarter of study participants who the model says had the highest risk of diabetes, this lifestyle intervention cut their chance of developing the disease by 28 percentage points. For those who had the lowed diabetes risk, this same intensive lifestyle change brought down their risk too – but only by 5 points.

Figuring out who is in the highest-risk group, by applying the new model to members of the general population, could really help guide doctors — especially since metformin does come with side effects, but also can help some patients get a jump start on losing weight, Sussman says.

“It is poorly appreciated how many patients receive treatments unnecessarily — when the possibility of benefit is very low, and may well be exceeded by the burdens of treatment,” says David M. Kent, M.D., a professor at Tufts University and director of the Predictive Analytics and Comparative Effectiveness Center at the Tufts Medical Center.