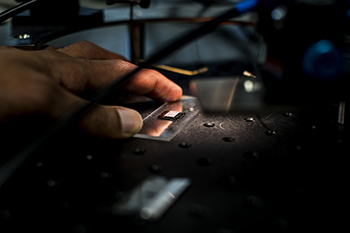 Researchers at the University of Michigan are developing a form of wearable technology that could one day offer continuous disease monitoring for patients with diabetes, high blood pressure, anemia, or lung disease.

The vapor sensor can detect airborne chemicals either exhaled or released through the skin, and would likely be the first wearable to pick up a broad array of chemical, rather than physical, attributes.

Other chemicals it could detect include nitric oxide and oxygen — abnormal levels of which can point to conditions such as high blood pressure, anemia, or lung disease.

Fan and his colleagues say their device is faster, smaller, and more reliable than its counterparts, which today are much too big to be wearable.

“With our platform technology, we can measure a variety of chemicals at the same time, or modify the device to target specific chemicals,” Zhong says. “There are limitless possibilities.”

The U-M researchers are currently working with the National Science Foundation’s Innovation Corps program to move the device from the lab to the marketplace.