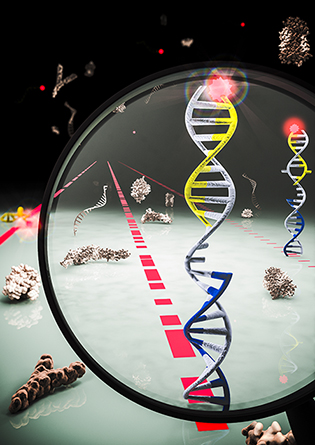 A new, inexpensive blood test developed by University of Michigan scientists may soon be used to screen for multiple types of cancer.

“What we have done is develop a new … principle for detecting any sort of RNA (ribonucleic acid) in blood,” says Nils Walter, professor of chemistry and biophysics at the University of Michigan, and an author of the study.

Walter says for decades, scientists thought RNA was a messenger. But within the past 15 years, they have learned that micro-RNA molecules — short strands that can bind to the messenger RNA — directly or indirectly control virtually all major life processes. Having too little or too much of a particular microRNA can fuel tumor growth. Cancerous cells have micro-RNA in them.

Walter and Dr. Muneesh Tewari, a research professor of internal medicine at the U-M Medical School, say they have developed a process in which they can confirm the capture of micro-RNAs and then analyze them.

“This could lead to technology that enables earlier detection in individuals at risk for cancer, earlier detection of recurrences in cancer survivors, and also better and earlier assessment of how well cancer therapies are working in patients,” Tewari says.

The study, “Kinetic fingerprinting to identify and count single nucleic acids,” was recently published in Nature Biotechnology. The university is pursuing patent protection for the intellectual property, and is seeking commercialization partners to help bring the technology to market.