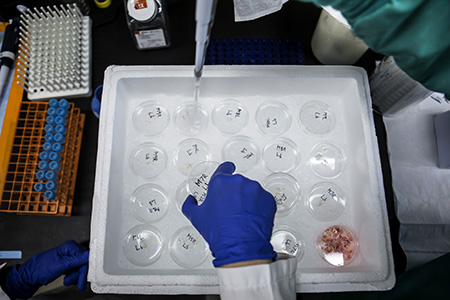 University of Michigan researchers have developed a small, implantable device designed to “attract” cancer cells that could eventually give doctors earlier warning signs of a relapse in breast cancer patients. The technology may even slow the disease’s spread to other organs.â€‹

“Breast cancer is a disease that can recur over a long period in a patient’s life, and a recurrence is often very difficult to detect until the cancer becomes established in another organ,” says Dr. Jacqueline Jeruss, associate professor of surgery in the U-M comprehensive cancer center, and one of the authors of the study. “Something like this could be monitored for years and we could use it as an early indicator of recurrence.”

Jeruss implanted the device in mice and found that it attracts a detectable number of cancer cells before they’re visible elsewhere. In a recent study, cancer cells spread to the lungs nearly 90 percent more slowly in mice that received the implants.

She says cancer cells are attracted to certain areas in the body, so the device acts as a sort of decoy or a magnet to attract the cells to that region. The device could potentially be used for other types of cancer as well, including pancreatic and prostate cancer.

She says she envisions the device being implanted just beneath the skin of breast cancer patients. Doctors could monitor it using a noninvasive scan. U-M is pursuing patent protection for the intellectual property and is seeking commercialization partners to help bring the technology to market.

The study is published in Nature Communications.