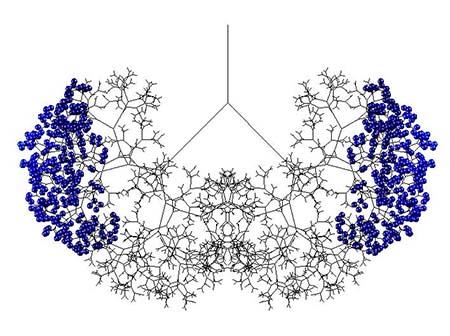 University of Michigan researchers have created a computer model of a lung that provides insight into why a treatment for adults with a life-threatening inflammation of the respiratory system has been unsuccessful. The technology may lead to improving the delivery of medication to treat patients.

About 74,000 adults each year in the United States die from acute respiratory distress syndrome. The treatment, called surfactant replacement therapy, delivers a liquid medication into the lungs that makes it easier for them to inflate. While the treatment has been successful with premature babies who sometimes have trouble expanding their lungs, it has been largely unsuccessful in adults despite almost two decades of research.

“Adult surfactant replacement therapy has been a great disappointment and puzzlement to the (medical) community…” says James Grotberg, the leader of the team that developed the technology and a professor of biomedical engineering at U-M, and a professor of surgery at the U-M Medical School. “But now, we think we’ve discovered why the later studies didn’t improve mortality.”

Grotberg says his team built a mathematical computer model that provided a three-dimensional image of exactly how the surfactant medication flowed through the lungs of patients in three clinical trials. A 1997 study that used a less concentrated version of the medication worked because the additional liquid helped the medication reach the tiny air sacs in the lungs.

Grotberg says doctors may be able to use the imaging technology to optimize the medication for individual patients. He says it could also be used for other types of research.

The research team recently published an article — A Three Dimensional Model of Surfactant Replacement Therapy — in the Proceedings of the National Academy of Sciences.