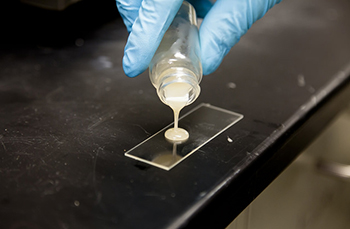 Researchers at the University of Michigan in Ann Arbor have developed a spray-on ice-repellent coating they say can make ice slide off equipment, airplanes, and car windshields.

Anish Tuteja, an associate professor of materials science and engineering at U-M, says the repellent is thin, clear, and slightly rubbery to the touch. He says the spray is inexpensive, and causes ice to slide off with just the force of gravity or a breeze.

Tuteja says the formula is made of a blend of common synthetic rubbers, which marks a departure from earlier approaches that relied on making surfaces either water-repellent or slippery.

“Nobody had explored the idea that rubberiness can reduce ice adhesion,” Tuteja says. “Ice is frozen water, so people assumed that ice-repelling surfaces had to also repel water. That was very limiting.”

The “icephobic” coating was applied to the right half of the license plate, preventing ice from sticking to that half after being placed in a freezer. 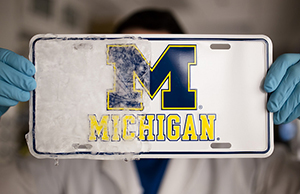 He says ice-removal methods available today — which include chemical melting agents or scrapers and hammers — can be expensive and labor-intensive. Tuteja says the U-M-developed ice repellent could have major implications for industries such as energy, shipping, and transportation in cold climates.

He says the new coatings stood up to a variety of lab tests including peel tests, salt spray corrosion, high temperatures, mechanical abrasion, and freeze-thaw cycles.

He says the researchers have developed a variety of formulas specific to the surface.

“I think the first commercial application will be in linings for commercial frozen food packaging, where sticking is often a problem,” Tuteja says. “We’ll probably see that within the next year. Using this technology in places like cars and airplanes will be very complex because of the stringent durability and safety requirements, but we’re working on it.”