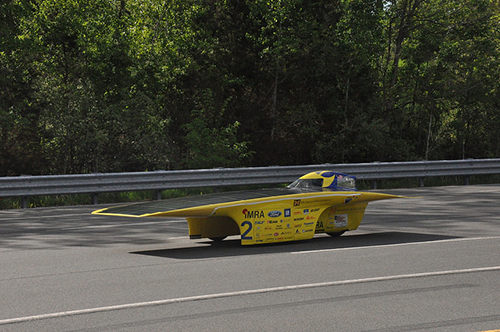 Teams from the University of Michigan, Michigan State University, and Western Michigan University are headed this week to Austin, Texas where they will join 20 other collegiate teams to compete in the American Solar Challenge.

The competition, which kicks off Sunday, challenges participants to design and build a solar-powered car that they will ultimately race over 1,700 miles across the country. The University of Michigan Solar Car Team won last year’s event, bringing the school’s total number of wins to seven.

This year, the U-M team — which has nearly 20 students participating in its race crew — will run Quantum — a three-wheeler that took first in the American race in 2012 and third in the World Solar Challenge in Australia in 2011.

“Quantum is much faster than the four-wheeled generation car,” says Pavan Naik, a junior industrial and operations engineering student, and the team’s project manager. “It’s more aerodynamic, and it weighs a lot less (320 lbs.).”

Naik says the Quantum, which has a carbon fiber body, a high-performance lithium-ion battery, and energy-efficient regenerative braking, uses the same amount of energy that it takes to run a hair dryer.

For more information about the eight-day event, which will end in Minneapolis on July 28, visit americansolarchallenge.org.

IN OTHER EDUCATION NEWS, Michigan State University now offers three new for-credit graduate certificates in human resources, leadership, and management through the Eli Broad College of Business. Applications for the online programs are now being accepted for classes starting in the fall.

“This program is for professionals looking to expand their knowledge and skills in human resources, leadership, or strategic management,” says Robert Wiseman, the Eli Broad Legacy Fellow of Management. “Students learn how to become more effective communicators, managers, and decision-makers and build an arsenal of strengths they need to become more effective leaders.”