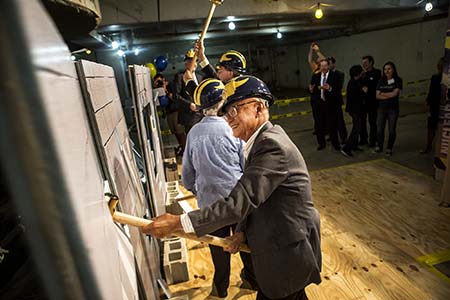 The University of Michigan has spent the past decade dismantling a nuclear reactor in a campus building to transform the facility into a $12 million nuclear engineering laboratory, which is scheduled to be completed in March 2017.

Gilgenbach says the renovated four-story building will contain more than 13,000 square feet of laboratories, offices, and conference rooms. The laboratories will serve as a space for professors and researchers to build and test gamma ray cameras for detecting nuclear materials, study the movement of water and steam as it relates to cooling nuclear reactors, and investigate amorphous materials (such as glass, gels, and thin films), which have relevance to radiation damage.

The building was first constructed as part of the Michigan Memorial Phoenix Project just after World War II as a place for researchers to investigate peaceful uses of nuclear technologies, such as life-saving medical treatments and abundant energy. The Ford Nuclear Reactor was completed in 1955, and was used to study nuclear medicine and nuclear power, providing a training ground for nuclear engineers. â€‹