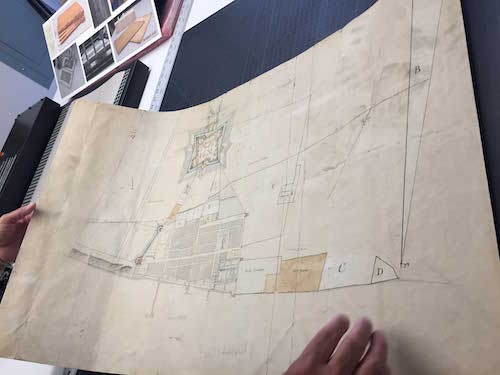 A recently discovered, hand-drawn and colored map that reveals a plan of the city of Detroit in 1790 is now part of the University of Michigan’s William L. Clements Library collection.

Historians conclude that the rare, 21-by-40-inch map, which was discovered in a family home in Ontario, is an original. Titled Rough sketch of the King’s Domain at Detroit, the map was drawn on high-quality, watermarked 18th-century paper, and signed by its author, D.W. Smith (Captain David William Smith), who was then a captain in the British Army assigned to Detroit.

Brian Dunnigan, curator of maps and associate director of the Clements Library, says the manuscript plan identifies the east and west boundaries of the “Domain,” which is an extra-wide ribbon strip of land that Antoine Laumet de La Mothe Cadillac, founder of Detroit, granted to himself in 1701.

The map, which captures the city at a time when U.S. troops were advancing on the Indian villages of northern Indiana and threatened the British garrison at Detroit, also includes specific plan of the Domain’s defenses and of Fort Lernoult, which was located at the intersection of Fort and Shelby streets. Following the War of 1812, the garrison was renamed Fort Shelby after Kentucky Gov. Isaac Shelby, who brought hundreds of volunteers to Detroit in the later stages of the conflict.

“This is a really special find because there aren’t any other maps that depict Detroit at this particular time period, which was about six years before the British peacefully evacuated the town and fort to make way for the arrival of United States troops,” Dunnigan says.

He believes the map was once accompanied by a key or a report that has not yet been found.

A forthcoming exhibition surrounding the map is planned at the Clements Library for next year.