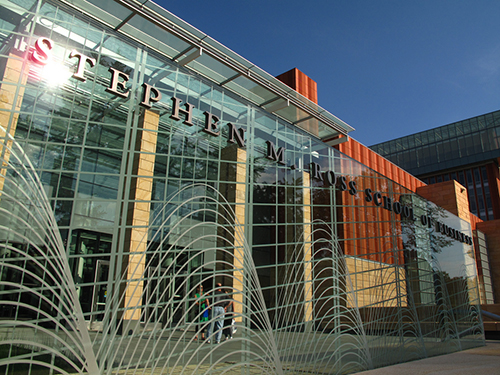 The University of Michigan’s Ross School of Business topped the charts of the Princeton Review and Entrepreneur magazine’s joint ranking of the top 25 graduate entrepreneurship programs. Its No. 1 position was given in recognition of the programs, courses, and engagement offered through the school’s Samuel Zell & Robert H. Lurie Institute for Entrepreneurial Studies.

“We have created a culture at Ross where entrepreneurship is a major focus of our curriculum and a core value,” said Alison Davis-Blake, dean of the Ross School of Business. “As more and more students look to entrepreneurship as a way to make a positive difference in the world, we are proud to be the leader in entrepreneurial education and will continue to innovate in the field.”

This marks the fourth consecutive year Ross has been ranked among the top five business schools in the country, and the first time it has taken the top spot. It was ranked No. 2 in 2012. More than 2,000 schools were surveyed for the ranking.

In 1927, the University of Michigan offered the nation’s first course in entrepreneurship at what is now the Ross School of Business, and established the Zell Lurie Institute in 1999. And just last year, Ross launched a Master of Entrepreneurship degree program, which is offered jointly with the College of Engineering.

During the most recent school year, 2,321 students were enrolled in the business school.

This recognition comes two weeks after Michigan alum Stephen Ross made the largest single donation in school’s history and became the third largest donor to a business school in the United States. Of the $200-million gift, $100 million will be designated for the business school to create a state-of-the-art career services space and practice-oriented research on topics of key importance to local and global firms.

Ross, who grew up in metro Detroit and is a nephew of the late industrialist Max Fisher, is founder and chairman of Related Cos. in New York. A graduate of U-M’s business school, Ross also has donated millions of dollars to the university’s athletic program to develop and renovate sports facilities, including major upgrades at Michigan Stadium. He’s also developing Hudson Yards, a large mixed-use project on the west side of Manhattan.