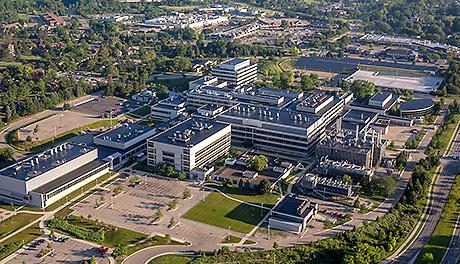 The University of Michigan in Ann Arbor announced a record high $1.4 billion in annual research funding during its most recent fiscal year that ended in June. It also approved $78.5 million for a project that will create 50 state-of-the-art pharmaceutical laboratories for the university’s medical school.

The project, which was approved by the U-M Board of Regents, will be located in northeast Ann Arbor and consist of the renovation of the last two usable buildings at the university’s North Campus Research Complex.

The renovated buildings — called 20 East and 25 — will be interconnected and feature repurposed lab benches, cabinets, and other materials from areas of the research complex that have already been updated. In addition, 101,000 square feet of laboratory space, which will be grouped by areas of research, and a two-story atrium will be included.

With the renovations, he expects the number of individuals who work at the research complex to grow from 2,700 to 3,400.

Two other projects now underway at the research complex include an effort to create a new clinical pathology testing facility that will analyze blood samples and other specimens from patients at the U-M Health System, and a $3.8 million plan to turn a former drug manufacturing building into U-M academic archive space.

The North Campus Research Complex sits on a 174-acre site and features 28 buildings. The space, which U-M acquired in June 2009, features hundreds of researchers from the university and the VA Ann Arbor Healthcare System, dozens of labs and offices, the M-City complex, more than a dozen startup companies that grew out of U-M research, shared facilities and equipment, offices for conducting clinical and pre-clinical research, various amenities, event space, and environmentally sustainable features.

About two thirds of the total volume of research at U-M is conducted under contract with various federal agencies. Much of this year’s growth came from the U.S. Department of Health and Human Services, where expenditures rose by 6 percent to $467 million.

Total expenditures from industry sources amounted to a record high of $85 million in FY 2016, up 8.5 percent from the previous year.