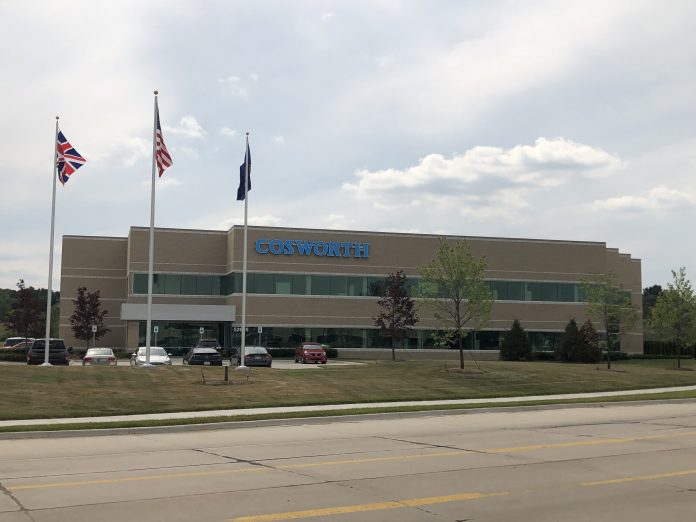 “I appreciate the confidence that Cosworth has shown in our state and our talented workforce,” says Michigan Governor Rick Snyder, who attended the unveiling. “Having this global company choose to build their North American headquarters in Michigan further cements our place as the world leader in mobility.”

“With a 60-year legacy and best known for pushing the limits in modern automotive solutions, we are eager and excited about the next chapter in the Cosworth story,” says Hal Reisiger, CEO of Cosworth. “Our North American headquarters brings us even closer to our tier-1 U.S. partners and reveals what the next generation of high-precision, 21st-century advanced automotive manufacturing looks like. We are committed to keeping Cosworth and Michigan at the forefront of innovation, design, engineering, and production to further advance vehicle and driver performance.”

The LIDAR sensor technology has no moving parts and is designed to build and provide stability that will meet the stringent automotive standards for reliability.

“At the grand opening of our North American manufacturing center, we demonstrated the stability, precision, distance, and field of view that are necessary to make autonomous or assisted driving safe,” says Reisiger.  “With a minimum of 3,200 lasers, a clear 120-degree field of view, and 200-meter range, we believe this solution is a game-changer for automotive sensor technology.”

Cosworth reported record revenue of $72.5 million for 2017 and record backlog of more than $440 million across long-term contracts. More than 100,000 cars on the road in the United States are equipped with Cosworth-patented AliveDrive technology that integrates camera sensors, vehicle dynamics data, and analytics software.

“We warmly welcome Cosworth to Shelby Township and Macomb County, as they are a shining example what is driving growth and innovation in advanced automotive manufacturing for the car of the future,” says Richard Stathakis, Shelby Township supervisor.