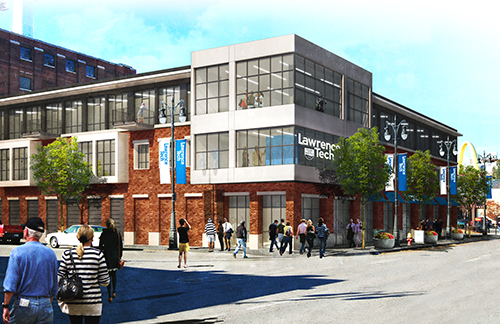 Two retailers have officially opened in Detroit: The Workshop and Turquoise Boutique.

Located in the Fisher Building in New Center, The Workshop “makes furniture out of reclaimed lumber from Detroit homes so each piece has its own unique address that comes along with it,” says James Willer, owner of the store and founder of Reclaim Detroit. The Workshop’s first-floor showroom includes section and dining tables, benches, and small-scale textile furnishings.

While each neighborhood has different types of wood depending on the year they were built, Willer says the woodworkers have mostly been working with reclaimed homes from the 1920s. “Most of that lumber is white pine from northern Michigan,” he says.

Willer says the store evolved following the renovation of Stella Café, now Stella Good Coffee, also located on the first floor of the Fisher Building. “Stella was already a showroom for us in a way and was kind of the impetus for us to start this. It keeps the mission going of reusing wood from Detroit’s history and putting people to work,” he says.

Meanwhile, at the Max M. Fisher Music Center on Woodward in Midtown, Turquoise Boutique hosted its grand opening on Monday. Owned by Monalise Green, the shop was originally located in Muskegon for nearly five years. Green says she moved the retail location — which sells upscale women’s clothing by Joseph Ribkoff, Frank Lyman, and Maggy London — to be closer to family and friends.

Lawrence Technological University also has plans to join the Midtown scene. On Wednesday, Midtown Detroit Inc. will break ground on a 30,000-square-foot, three-story commercial building at the northwest corner of Woodward and Willis (just south of a McDonald’s). The building — expected to open in fall 2014 — will house Lawrence Tech’s new Detroit Center for Design and Technology, which will consolidate existing programs in Detroit run by the College of Architecture and Design.

The new LTU center will be home to three programs: Detroit Studio, detroitSHOP, and Studio Couture.

“The arts are a driving force behind the resurgence of Midtown Detroit, and this new center will add to that trend,” says Sue Mosey, president of Midtown Detroit. “We also need creative development in this area, and the Lawrence Tech faculty and students can contribute to that process. Adding this center is an important step in the long-term redevelopment of this part of the Woodward corridor.”

In related news, Mosey is working to bring a restaurant to the former Agave space at the southwest corner of Woodward and Canfield. In turn, Maurice Wiggins, CEO of International Hospitality Group in Detroit, plans to open The Addison at Woodward and Charlotte (formerly Atlas Global Bistro) along with Restaurant 55, east of the Renaissance Center. Both eateries are set to open in 2014.