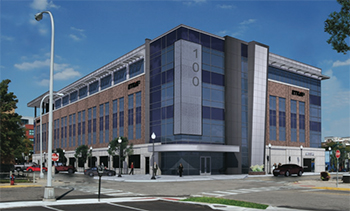 “We are excited to begin this new development in Royal Oak, where there is a definite need for more office space,” says Douglas Etkin, principal of Etkin. “Companies are continually looking to move there and Etkin is right on target to meet market demand.”

In turn, Huntington Real Estate Group is working to build a mixed-use structure at Third and Williams streets in downtown Royal Oak. Currently a surface parking lot owned by the city, the project would be six to eight stories high, and offer ground-floor retail along Williams, two levels of parking, topped by offices. Two stories of residential apartments may be added above the offices.

“Downtown Royal Oak has a very strong nightlife, and to complement that activity and add more opportunities for restaurants and storefronts in the downtown district, adding more office users makes perfect sense. We are in the early planning stages, and will be meeting with the city shortly on the latest opportunities.”