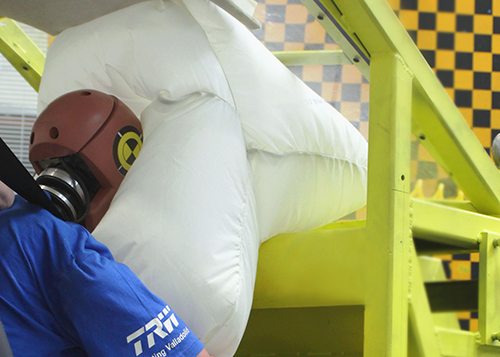 Livonia-based TRW Automotive Holdings Corp. is teaming up with French automaker Citroën to implement airbag technology in the roof of the 2014 C4 Cactus, in lieu of traditional front passenger air bags.

Positioned above the vehicle’s windshield, the airbag deploys along the windshield in front of — rather than toward — the passenger. While still providing a form of added restraint, the new system also saves valuable space in the vehicle’s dashboard.

“Interior design requirements have evolved significantly over the last decade with some manufacturers looking for more instrument panel space for the latest multimedia technologies or a means of increasing storage, or are proposing more open and airy cockpit environments,” says Dirk Schultz, engineering director for TRW’s inflatable restraint systems.

Schultz says by eliminating the need to package a passenger airbag in the instrument panel, the new design concept also can significantly reduce the development costs of the dashboard as there is no need to design and test a specific “door” that opens with the airbag deployment.

“We are proud to launch our roof airbag for the first time on this modern, striking new vehicle which marks a new era for the French brand,” says Thierry Metais, TRW global account director for PSA Peugeot Citroën. “Our technology has helped to deliver a de-cluttered, more relaxing cabin environment while supporting restraint performance across the range of occupants.”

TRW Automotive reported sales of $17.4 billion in 2013. The company operates in 24 countries through its subsidiaries, employing approximately 65,000 people worldwide.