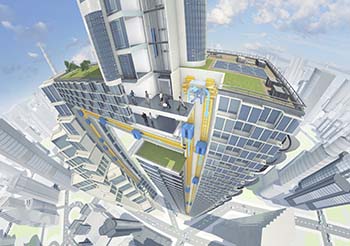 A new cable-less elevator system created by Troy-based Altair and ThyssenKrupp AG, an engineering group in Germany, will use electromagnets to allow elevators to travel between floors and also move horizontally. Additionally, the new system does not require any roof-mounted cables, enabling elevators to travel with no limits in height like conventional elevators.

Altair ProductDesign, which offers product development and industrial design services, also reduced the weight of the support structure, which attaches to the back and underside of a metallic cabin, by more than 40 percent.

“Thanks to the weight saving achieved during this project, we have additional confidence in the electro-magnetic concept as a practical alternative to the traditional cable system,” says Thomas Kuczera, head of mechanical development for ThyssenKrupp Elevator. 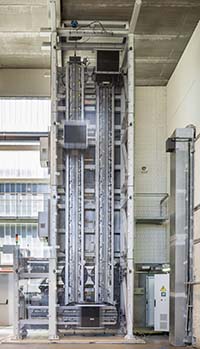 â€‹Kuczera says Altair engineers used carbon fiber materials for the walls of the elevator’s cabin, reducing the cabin weight by 56 percent below the target weight.

“The system is bringing real innovation to an industry that is having to rapidly adapt to technology advances enabling mega-structures,” says Markus Haller, vice president of Altair Germany.

Kuczera says Multi operates similarly to a metro system, and can incorporate many self-propelled elevator cabins per shaft running in a loop, increasing the shaft transport capacity by up to 50 percent. He says although the ideal building height for Multi installations starts at about 985 feet, the system is not constrained by a building’s height.

Kuczera says the Multi elevator system has now entered the prototyping phase, with a working scale model of the system at ThyssenKrupp Elevator’s innovation center in Spain.

Troy-based Altair ProductDesign, a subsidiary of Altair Engineering Inc., has a staff of more than 800 designers, engineers, and scientists.