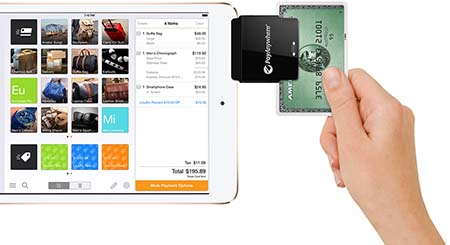 The new PayAnywhere mobile card reader, created by Troy-based credit card processing company North American Bancard, will be the first device of its kind in the United States to accept Apple Pay when its partnership with Apple launches next week.

“I personally have visited the Apple store at Somerset in Troy, and every time I go in there, there is a sea of people,” says Marc Gardner, CEO of North American Bancard. “So being in the Apple retail eco-system, we think, is wonderful to accelerate distribution.”

The partnership will allow the device, which turns iPhones and iPads into a point of sale system using a card reader that attaches to the audio jack, to accept all major cards as well as Apple Pay — an application that lets consumers securely enter their card data into their iPhone, iPad, or Apple Watch, and make payments without having to carry physical cards on them.

PayAnywhere’s new mobile card reader will use near field communications — a form of technology that lets smartphones and other enabled devices communicate with each other — to read and process card information from Apple Pay.

The device will retail for nearly $40 exclusively on Apple.com and in Apple stores.

“Apple Pay is gaining material traction in the market place,” Gardner says. “We want to support adoption of that technology throughout mobile merchants.”

PayAnywhere will cover the cost of the first $5,000 in Apple Pay transactions per device. Generally, the company charges 2.69 percent per swipe, and 3.49 percent plus 19 cents per keyed entry.

“The main component of the logic behind why we provide the first $5,000 in Apple Pay transactions for free was to get people over the barrier of what they’re not currently comfortable with,” Gardner says.

Launched in 2011, PayAnywhere also offers a storefront point of sale system through a tablet, tablet stand, and app, although this device is not compatible with Apple Pay.

“We have a high desire to distribute more solutions for the iPhone and the iPad in Apple retail not only in the (United States) but internationally,” Gardner says.